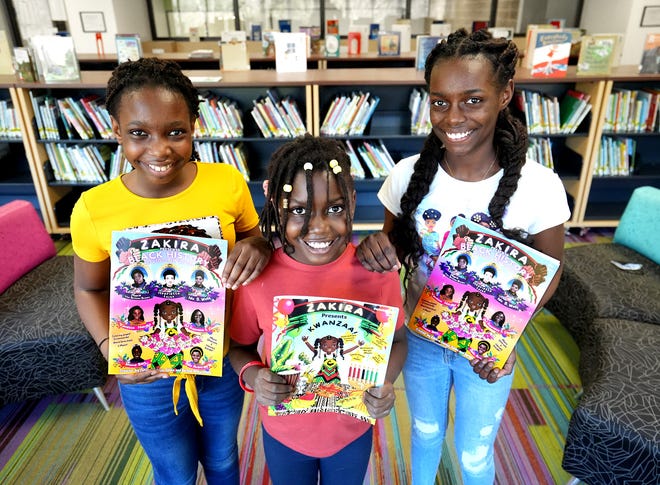 On Saturday, the Karl Road branch of the Columbus Metropolitan Library will host a book fair showcasing literary works by new Americans, immigrants and refugees from all over Ohio — and beyond.

Twenty authors with roots in disparate corners of the globe, such as Venezuela, Pakistan, Cameroon, China, Nigeria and Nepal, will read passages and sign copies of their works. The fair will include fiction and non-fiction for adults and children. The youngest author will only be 9 years old.

The free public event will take place from noon to 5 p.m. Saturday at the Karl Road branch of the library, 5590 Karl Road, in the Northland area of ​​Columbus.

“We want everyone to come,” said Deba Uwadiae, editor and publisher of New Americans Magazine, which is organizing the event in conjunction with the library. “It’s not just for new Americans — it’s for everyone in Ohio. Come and see what is written. Come see history being made.

A diverse group of authors, young and old(uh)

A cohort of young writers will be among those sharing their work at the fair.

Sisters Zalika, Zakiya and Zahara Obayuwana, whose parents are from Tanzania and Nigeria and are between 10 and 13 years old, will present their activity books, such as “Zakira Presents Black History” and “Zakira Presents Ramadan”. The sisters are students from Columbus City Schools.

Likewise, 9-year-old American-Venezuelan author Roman German, born in New York, will present his book “The Adventures of Roman German”, about a boy and his friends Matt-the-Monkey and Jerry-the- Giraffe looking for hidden technologies in the world.

Davis Oni, a 10-year-old Nigerian-American who lives at the Lewis Center, will sign copies of his “Adventures of Jéjé,” inspired by African-themed stories from Rubies Africa, an app his mother created for short African stories. .

For adult audiences, Imali J. Abala, professor of English at Dominican University in Ohio, will read excerpts from “Fragmented Lives”, a semi-autobiographical novel about a young Kenyan immigrant to the United States.

Indian-American Srirupa Dhar, a former college professor and college teacher in Columbus, will present “For a Drop of Rice Water,” a novel set during the 1943 Bengal famine.

Other authors with books involving family histories include “Message in a Matchbox,” by California-based Iranian-American author Sara Fashandi, which is about her brother’s struggles growing up in poverty in Tehran, and “Jasmine and Journeys: The Life Quest of a South Asian Woman,” by Najma Shamsi, a retired English and political science professor who lives in Columbus. This latest book interweaves the author’s family history with that of Pakistan.

Hellen Yee, co-founder of the American Institute of Alternative Medicine and former vice president of Stonewall Columbus, a non-profit organization that advocates for the interests of the LGBTQ+ community, will read an excerpt from “I Belong Here: The Life I was Born for in America”.

Yee said the memoir was about “my awkward immigrant child coming to America and experiencing bullying and racism…but (discovering) confidence and self-esteem and developing math skills and friendships in the process of road”.

Uwadiae himself will present a new collection of essays he edited with three colleagues, entitled “Nigeria’s Aborted 3rd Republic and the June 12 Debacle”, which stems from his time as a journalist in Lagos, the economic capital of the country. African in the 1990s.

Uwadiae, who emigrated with his family from Nigeria a decade ago, said he organized the fair to provide an opportunity for authors whose work is not getting the attention it deserves.

He said many new Americans feel the need to write to educate others about the immigrant experience. Certain themes run through many of the authors’ works.

“People from Asia, Africa, South America – there’s this common theme of prejudice, being seen as outsiders, that people want to find out. But another thing that’s common is the determination to work to belong and be accepted,” Uwadiae told The Dispatch.

“The Columbus Metropolitan Library is Open to everyonewrote Keith Hanson, branch manager of the library, in an email. “These words are even carved above the entrance to our main library. We celebrate diverse cultures and life experiences and work to make our libraries spaces where everyone can feel welcome.

Peter Gill covers immigration and new American communities for The Dispatch in partnership with Report for America. You can support work like his with a tax-deductible donation to Report for America here:bit.ly/3fNsGaZ.