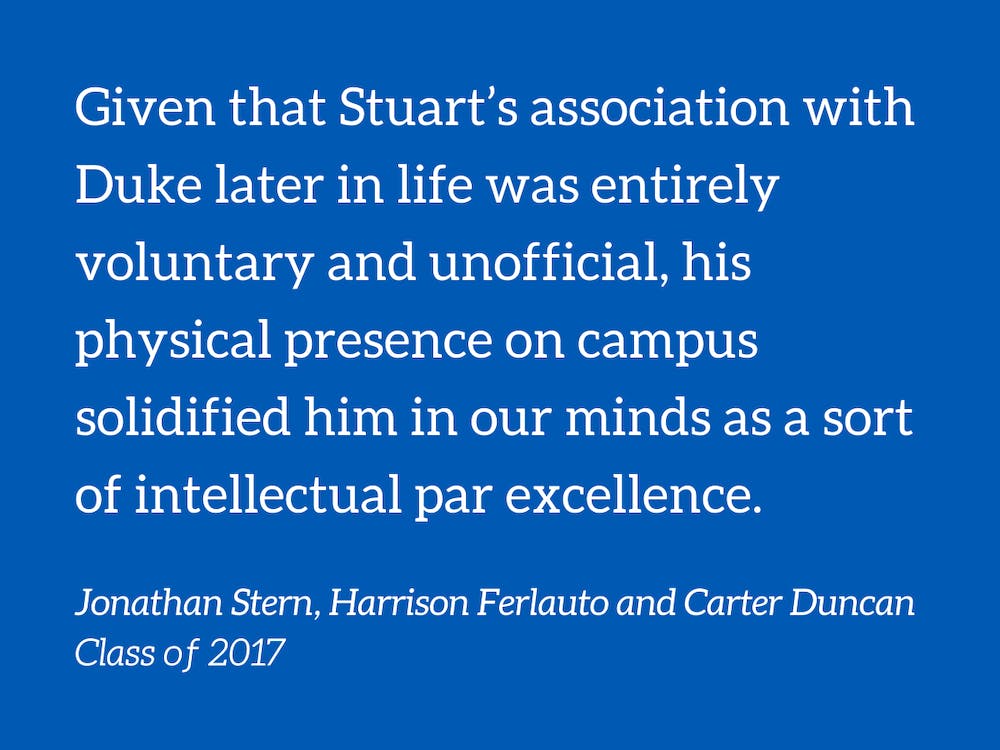 A tribute to Stuart Barr

Who is Duke for you? Invariably, many will think of a favorite teacher or classmate, maybe even Coach K or JJ Redick.

For us, however, the answer is Stuart Barr.

We met Stuart through his constant presence at the Perkins Library, where he spent many days listening to classical music and soaking up as much knowledge as humanly possible. Very rarely do you meet a retiree who spends more time learning than you do, but that was Stuart!

We were so enchanted with the man that we made sure to continue the friendship even after we graduated. We sometimes spoke on the phone but mostly by email, where our correspondence was full of literary suggestions, heated philosophical debates, sports discussions, Duke news: in a word, everything. While searching through the emails, we recently discovered that Stuart had sent us north of 1400 in total.

Sadly, Stuart passed away in early October, and with him, a bit of the essence of Duke. Aside from maybe a few notable Duke basketball players, it wouldn’t be a stretch to say that Stuart was the most recognizable man on campus. You can spot him 400 feet across the quad, especially on those beautiful days in North Carolina – walking slowly, purposefully, usually hissing, always with a bucket hat on top and a copy of The Chronicle in it. his right hand – no doubt on his way to the Perkins library. By our calculations, he typically spent ten hours a day at Perkins, arriving when it opened and staying until 6 or 7 in the evening.

Stuart dated Duke as an undergraduate student (Trinity ’64), then Duke Law School (’67), then had a career as a lawyer, proudly serving on the USS Intrepid in Vietnam. But despite these varied experiences, he believed there was always more to learn: â€œSo many books, so little time,â€ to paraphrase Mae West. It was one of his guiding mottos and something he told us probably a hundred times. It often seemed like he had read the entire Perkins library – and maybe he really had, given the amount of time he spent there. Unsurprisingly, Stuart also had an excellent memory and could quieten the mind for half an hour or more in a web of historical storytelling, most often weaving himself into the narrative.

Always concise, witty, and wise in his own writings, Stuart asked no less of the students he taught. We’ll never forget how much red ink he left behind on the first draft of Jonathan’s essay on Duke’s economics department – and that’s a good thing, because the final version turned out to be turned out to be miles from the first. Stuart has also spent hundreds of hours reviewing the essays of international graduate students, always looking for the winning word, the right turn of phrase, the right voice to express their ideas. To this day, Stuart remains one of the fiercest publishers we’ve ever known. (That’s a scary thought, but one wonders what he could say about this tribute.)

Why does Stuart embody Duke’s spirit so much in our minds? Well, on the one hand, he loved school. A former yearbook editor, he knew the history of Duke, the teachers (60 years ago), the hoops, football and he even had a passion for “unpaid” sports. Plus, he loved the campus grounds. If he wasn’t at Perkins, you might find him offering a tour of the gardens, charming visitors from all over the world, and showing off the overt beauty of the gardens.

During our short time as alumni, we have already begun to experience the various ways that professors, religious leaders, and other university employees can maintain our connection to the university. Since Stuart’s association with Duke later in life was entirely voluntary and unofficial, his physical presence on campus solidified him in our minds as a quintessential sort of intellectual. It was with this in mind that he passed on a collection of his books to each of us and was happy to choose who should receive what. It was a fitting and generous farewell gift.

Our thoughts and prayers are with Stuart, his family and the countless students and acquaintances who were fortunate enough to know this remarkable man.

Get The Chronicle delivered straight to your inbox

Subscribe to our weekly newsletter organized by an editorial. Cancel anytime.