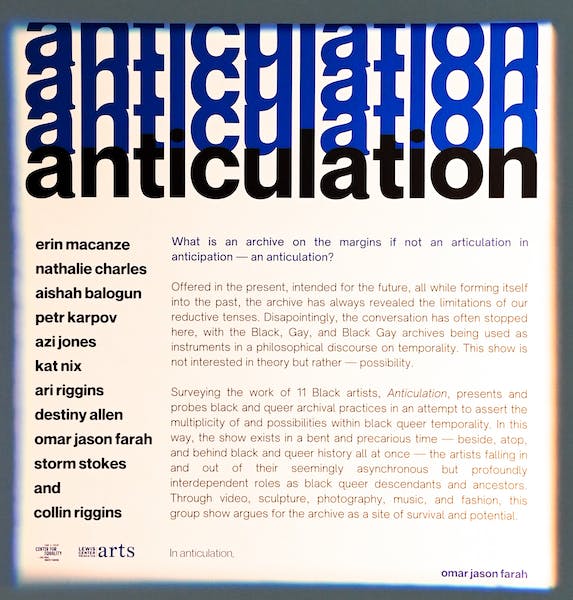 Anticipatory articulation: questions and answers with the curator and the artists of “Anticulation”

“Anticulation” is the latest art exhibition to be held in the CoLab space at the Lewis Center for the Arts. The title of the exhibition “is a word, created for this exhibition, which aims to capture the particularities of black, gay and black gay archival practices,“ according to the curatorial statement. The Daily Princetonian asked the exhibition’s curator, Omar Jason Farah ’23, to expand on some of these themes and also interviewed some of the artists about their work in relation to Farah’s notion of anticulation. “anticipation” will be on display at the Lewis Center for the Arts until October 13.

Farah is editor-in-chief of the “Prince”.

The following exchanges were in the form of written comments and have been edited for length and clarity.

The Daily Princetonian: Self-expression has long been considered one of the central goals of art, and this has often been tied to ideas of the artist as an individual genius. When it comes to artists from marginalized communities, how do you see the relationship between these notions of self-expression and self-expression as contributing to a larger collective canon?

Omar Jason Farah: The question of how cultural production differs at the margins has been central to the two shows I presented at Princeton as well as most of my research. What I understood is that, despite the attraction of constructing aesthetic criteria and establishing technical patterns, it is ultimately a futile and limiting undertaking.

DP: Articulation and anticipation. You combine these two words in the name of the show “Anticulation”. Can you expand on this notion of creating both for oneself and for the future – either one’s future self or one’s descendants?

OF: I spent the summer deep in the Colin Robinson archives. Robinson, alongside his Essex friends Hemphill, Joseph Beam, Marlon Riggs and others, was part of a prolific and historic moment of cultural production in Black Queer New York. Through their work, and generally as people, this cohort engaged in rigorous and intentional self-archiving – even in the face of rejection, failure and relative obscurity.

They knew, I believe, that their words and their films and their theory would be vital to people today. “Anticulation” is an affirmation of this faith. It’s a call back in time to express gratitude and wonder at the foresight of these incredible characters who articulated themselves even when those around them weren’t interested because they anticipated me, they anticipated the audience that came to this show, they anticipated a world that could lend an attentive ear.

DP: Do you feel a certain urgency to engage in this anticipatory articulation, this anticulation?

OF: What’s cool about this show is that in introducing this framework, I identify particular historical works as anticulation, but the show itself is also a practice of anticulation. All the practices of my artists are, in their own way, forms of anticulation. So, yes, I can say that historical anticulation was urgent, as is all self-expression – if you’re a bit interesting – but I’m sure of it because this show was a personal form of anticulation, and I felt this urgency myself. This is what drives all my work.

DP: Where do you find the source of this urgency?

Get the best of ‘the prince’ delivered straight to your inbox. Subscribe now »

OF: For me, it’s linked to the marginality you were talking about earlier. I think one of the important features of marginal work is that although you can never represent [their community] — and the question of representation is itself narrow and ignorant — identity at the margin often asks you. So, unlike the people at the social center, who are never asked who they are and where they come from, we are always struggling with these questions. Funny enough, this engenders homogeneity at the center and forces a certain individualism for those of us further away.

DP: Archives, works of art and the self all have complex relationships with materiality. What do you find at the intersection of art as an archive of self, of a larger community?

OF: At this intersection, I personally find a life of work. This is the insoluble question: How do we transpose ourselves into the forms and representations that convey us? What I can say is that “Anticulation” offers a wide range of answers to the question. Artists have each taken very different approaches to considering archiving. I think the work of Aishah Balogun, Nathalie Charles and Erin Macanze has raised important questions about the ability of the camera to document itself. But on the whole, my artists give you food for thought around the question of the archive and in particular the archive on the margins.

DP: How did you see this idea of ​​anticulation embodied in your creative process or in your works included in this exhibition?

Erin Macanze: My recent works focus a lot on archival temporality and the break in the transmission of ancestral knowledge. Actively going through processes of archiving, in a process of rediscovering who you are in conjunction with shared stories, is key to the framework of anticulation.

Storm Stokes: We were inspired by a discussion of queer time as a method of memory and existence. We wanted to create a structured improvisation that used a strategic cycle of language and movement to illustrate a collective and eternal consciousness. As dancers in other spaces on campus, this was a great opportunity for us to explore performance amidst visual aesthetics.

Azi Jones: Having the chance to put summer-funded work that I think could have sat on my desk on a show alongside peers whose work I really admire is something that I think Princeton has so much Not needed anymore. Students need to be able to have better access to the spaces they need to do more things like this.

Collin Riggins: I see my work, “andyouwillfind”, as doing a few things. First, it was a sound experience. John Coltrane is probably best known for his mastery of free jazz, which essentially attempted to disrupt structure and tempo through improvisation. If you listen, it sounds very different from cool jazz or bebop or any of those earlier forms that were much softer. So when people heard Coltrane’s free jazz, many cats realized they couldn’t dance to it. It was too confusing.

For me, I always thought it was a radical sugar and honey iced tea – to throw a spanner in the convention and make people sit with it. But I also wondered if the idea that you couldn’t dance to Trane was entirely true. So I asked my good friend Khari to perform an improv dance to contemporary hip-hop music that I thought captured the activism of free jazz. When I synchronized his movement with Trane’s Ascension, I could really see how they worked in harmony. They ebbed and sank together, working as a unit. What brought them together was their radical freedom of expression and their refusal to conform to structure.

“andyouwillfind” was also a tribute to black activism more broadly. This is where the idea of ​​anticulation really comes in. The way the tradition of black activism is captured in the archives – that is, American consciousness – often demonizes black thought. You would think that people like Fred Hampton were driven by intense hatred and only intense hatred. It’s certainly an easier way to understand his ultimate murder by the FBI than to actually confront the insidious legacy of white supremacy.

Yet when you actually engage in this archival materiality, you discover that the opposite is true. These thinkers – thinkers that many of us are still trying to catch up with – were driven by the opposite: unyielding love. They articulated this love so deeply and actively anticipated and worked towards a world that could contain such love in abundance. My film attempts to capture black activism as it exists in the archives and to center the love that underlies it. I hope this practice can inspire people to really think about how storytelling works in the American collective memory.

José Pablo Fernández García is a senior from Ohio and editor of The Prospect at “Prince”. He can be reached at [email protected].