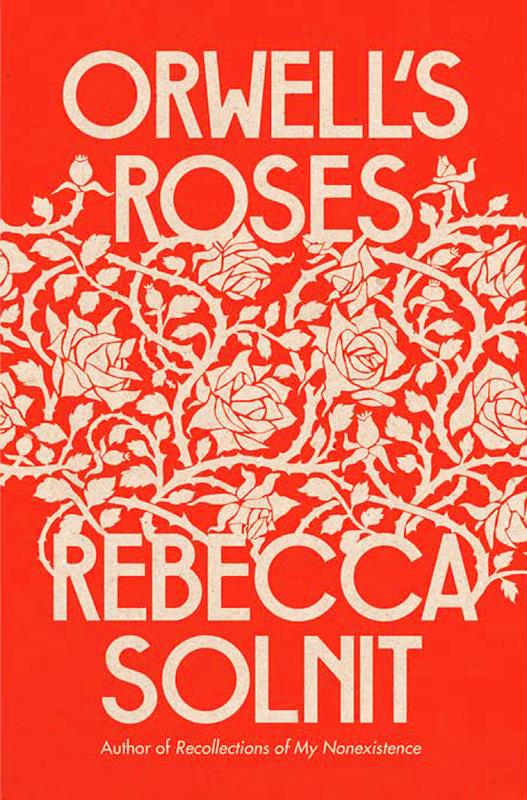 Inspired by George Orwell’s love for gardening, Solnit’s rambling book should appeal to both green and politically engaged people.

Roses are in dire need of pruning. My hiker in particular is getting very tangled; too many whipping tendrils meandering haphazardly from all angles. But it’s so pretty that it’s hard to be cleanly brutal with it, although it would likely benefit from some shrewd clarification. And yes, it was the experience of reading Rebecca Solnit’s Roses of Orwell that refreshed my memory.

The book is and is not both about George Orwell, just as it is and is not about roses. It belongs to a whimsical category in its own right, winding quite elegantly through many topics loosely related to one or the other; more a wildly overgrown essay, from which side shoots constantly emerge for attention, than a book. But at its root is the fact that in 1936 the writer and political thinker planted roses in his Hertfordshire garden. And when Solnit arrives on her doorstep more than eight decades later, she finds the rose bushes (or at least what she considers to be the same rose bushes) still in bloom, a living link between past and present.

From there emanates the most enjoyable part of the book – a reflection on what gardening might have meant for Orwell, but also what it means for gardeners around the world; the beauty of today, the hope for tomorrow and the desire to create something for those who will come after – all of which resonate in the best of politics.

To make a garden is to feel, in Solnit’s words, more “agrarian, sedentary, betting on a future in which roses and trees will bloom for years and the latter will bear fruit in the decades to come”.

By the time Orwell’s roses bloomed that summer, the Spanish Civil War had broken out. As they grew, Europe moved closer to the conflict. But the buds would still swell and the petals would still fall, and in the midst of death there would be new life, a cycle that helps explain why gardens and nature in general have been such a comfort to so many people throughout. the grief and loss of the pandemic.

But roses, in the story of Solnit, do not only symbolize the eternal. They also symbolize joy, frivolity and a sort of sensual pleasure not always associated with Orwell, so often presented as a rather austere and austere figure; a chronicler of misery in his writings on the underpaid and exploited, and in his fiction a prophet of doom, warning against the evils of totalitarianism. Choosing to focus on the gardens he planted – in Hertfordshire and, later, on the farm he bought on the Scottish Isle of Jura – and the happiness they brought him, Solnit is restoring something that is often lacking not only in Orwell but in the political tradition of which he is a part.

â€œHis darkest writings,â€ she notes, â€œhave moments of beauty; his most lyrical essays are nevertheless grappling with fundamental problems.

Everything in the life of a leftist intellectual should not be joyless utilitarian or ideologically engaged. To imagine Orwell digging in his vegetable beds also perhaps means understanding some sort of quiet rural English, which is not at all chauvinistic. When she quotes him admitting in 1940 that “outside of my job what matters most to me is gardening, especially vegetable gardening,” you instantly remember Jeremy Corbyn in the process. to go around his garden.

Orwell’s readers at the time, it must be said, did not always enjoy his favorite hobby. After writing about his roses in Tribune, he noted in a subsequent column that “an indignant lady wrote to say flowers are bourgeois,” suggesting that the soul-sapping spirit of left wars on Twitter may have existed long before Twitter itself.

But Solnit makes a compelling case for the importance of recognizing what Orwell loved and appreciated, as well as what made him angry or saddened him, without hesitating to accept that those who actually work the land to earn their money. lives are often much less lucid about the country. life that middle class people with chickens running through their orchards.

Roses have their thorns, and for Solnit that includes the environmentally destructive manner of their modern mass production. She made the leap from Orwell’s garden to the industrialized rose farms of present-day Colombia, supplying North America with cheap flowers at an allegedly high cost for their poorly paid, unorganized labor – the kind a story that Orwell himself might have told in the past.

But not all of the branching diversions in this book are so successful. A chapter on charcoal, which ends by asserting that Orwell’s planting a garden half a century before climate change entered the public consciousness could be interpreted as the education of “a few other earth-producing organizations. ‘oxygen and carbon sequestering’, feels crooked at best. grafted onto the rest. I could have happily taken the secateurs into Solnit’s reflections on the coincidence of having Jaffa cakes served on his British Air [sic] flight to Britain, then reading an article about Palestinian children visiting Jaffa Beach – an anecdote that tells the reader nothing significant about either.

But then, in each garden, a small bindweed creeps in. Green people and politicians alike will want to curl up with this book as the year of gardening draws to a close and we reflect on a time when nature has been more of a comfort than usual. It’s been a good year for roses, at least.

Comments will be moderated. Keep comments relevant to the article. Comments containing abusive and obscene language, personal attacks of any kind or promotion will be removed and the user banned. The final decision will be at the discretion of the Taipei Times.