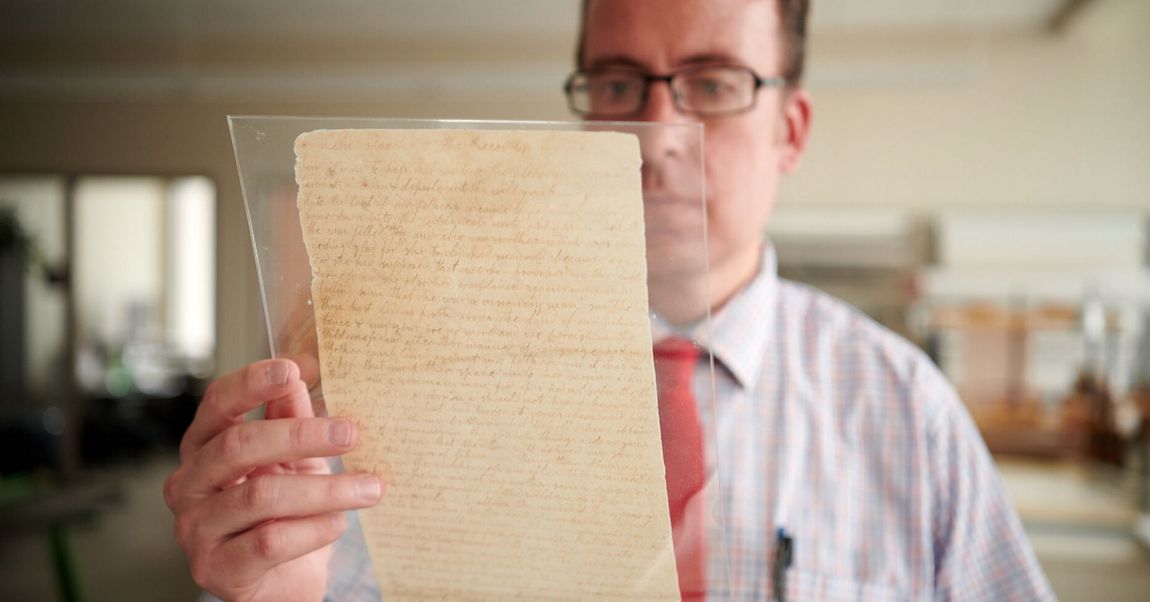 Joseph Smith reported seeing the gold plates in a stone box for the first time in 1823.

Eighteen years later, in October 1841, after translating the language on the plates and publishing the Book of Mormon, Smith sealed the original Book of Mormon manuscript in another stone box – the cornerstone of the Nauvoo House in Illinois.

To be fair, he was trying to preserve the manuscript, said Robin Jensen, volume co-editor and historian of the Joseph Smith Papers.

When Lewis Bidamon, Emma Smith’s second husband, found the original manuscript four decades later, it had suffered extensive water damage. Of the approximate 500 pages of the manuscript, only 232 portions remained, or about 28% of the original text. In the years that followed, some pages and fragments were given to visitors to Nauvoo as souvenirs.

Now, more than 140 years later, the Joseph Smith Papers team has pieced together what remains of the original Book of Mormon manuscript and released a 755-page book titled “Revelations and Translations, Vol. 5: Original Book of Mormon Manuscript,” which features the first complete photographic record of one of the most important documents in the history of The Church of Jesus Christ of Latter-day Saints.

“It’s a tremendous achievement,” Jensen said. “This volume is a landmark in Book of Mormon scholarship.

The new volume, published by The Church Historian’s Press and released Wednesday, is the latest installment in the Joseph Smith Papers series. It was originally slated for release in November 2021, but was delayed due to supply chain issues.

What is the original manuscript of the Book of Mormon?

Latter-day Saints believe that Joseph Smith translated the Book of Mormon with divine power, dictating the words of the ancient book to various scribes for several months before its publication in 1830.

The original manuscript was handwritten with quill pen by Oliver Cowdery and other scribes as Joseph dictated the text between April and June 1829. The Book of Mormon remains a central book of sacred scripture in the faith. of Latter-day Saints. As of October 2020, the church has published 192 million copies of the Book of Mormon in 112 languages.

The original manuscript is just one step away from Joseph’s gold plates and divine translation experience, Jensen said.

“It’s the artifact that resulted from the translation process,” he said. “To me, this is just remarkable. I am amazed that we have access to this exact document. Biblical scholars would kill for a first generation copy of any of the New or Old Testament texts. We have the original manuscript, and it’s so unknown in so many religions in the world today.

Why the publication of the original manuscript took years

The Joseph Smith Papers team knew this would be a difficult project.

What remains of the original manuscript is badly discolored, obscured, or otherwise damaged.

“Some of the leaves that survived are almost invisible to the naked eye,” Jensen said. “If you could pull out a page of the manuscript and look at it, you wouldn’t be able to read it. You might recognize that there is text on the page, but you might not be able to read it.

Most images in the Joseph Smith Papers appear as they are, but a digital edition was required in this case.

Joseph Smith Papers researchers used multispectral imaging, UV lighting, and other technologies to make the text as visible as possible in high-resolution photographs. The volume includes full explanations of what historians have done with the images.

“This volume is going to be a more readable, clearer and more productive experience than looking at the original documents themselves,” Jensen said. “Without this photo editing, we would have presented several pages that were simply blank, which would have been very useless for readers.”

Jensen credited the Church History Department’s preservation team for their dedication and attention to detail in carefully removing many pages or mylar fragments to be scanned as part of the “long” photography process.

“I can’t say enough praise for those who worked on the images for this manuscript,” Jensen said. “It is because of their dedication that this volume is the gem that it is.”

Find all the fragments

The other challenge was to collect all the remaining page fragments and put them together like a puzzle.

The church has a significant portion of the Book of Mormon manuscript, but not all of it.

The Wilford Wood Museum in Bountiful owns parts of it. The J. Willard Marriott Library of the University of Utah Special Collections has one sheet and other portions are in private hands.

“Some of them are full pages where you can read the entire text. In other cases, there are only small fragments,” he said. a process of examining surviving fragments and trying to piece them together. It’s kind of like putting together a 2,000 piece jigsaw puzzle, except you don’t really know what it looks like. You don’t have all the pieces and there are no edge pieces to make it easy for you. It was difficult.

With all the fragments and pieces in place, readers can view the high-quality images and see how they would have appeared in the original manuscript. The volume also includes a color-coded transcript, introductions, and background material.

The Valuable Contributions of Royal Skousen

The new volume would not be complete without the valuable contributions of Royal Skousen, said Jensen.

Skousen, who retired as a linguistics and English professor at BYU in 2020, began examining the original Book of Mormon manuscript in 1988 to prepare and publish a transcription of the original text. Its goals were to discover the original wording and show how editors and printers modified the wording.

Skousen called his monumental undertaking the Book of Mormon Critical Text Project and published the first two volumes, typographical facsimiles for the original Book of Mormon manuscripts and printing, in 2001.

The transcriptions and annotations in the new Joseph Smith Papers volume are based on years of work by Skousen as part of the Book of Mormon Critical Text Project.

“He spent his entire career on these manuscripts,” Jensen said. “Without his work, this volume would not be what it is.”

The transcription preserves corrections and revisions of any kind, line and page breaks and the locations of interlinear insertions. The handwriting of each scribe is identified by different colors to facilitate analysis.

There are four scribes identified in the volume:

Years of work on the volume have given Jensen an appreciation for many aspects of the Book of Mormon.

A fascinating fact is that Joseph Smith allowed John H. Gilbert, who was not a member of the faith, to add punctuation to the Book of Mormon.

He also said it was important to recognize Emma Smith’s contributions and her role in publishing the Book of Mormon. She served as secretary at the start of the translation process and provided unwavering support to Joseph.

“Every time I look at this manuscript, I am reminded of the loss, dedication and sacrifice of those early Latter-day Saints, those early believers,” Jensen said. “That could be a lesson for Latter-day Saints today. How often do we take the text of the Book of Mormon for granted? We should remember the sacrifices that went into creating it.

The Joseph Smith Papers collaborated with Community of Christ to publish the Book of Mormon Printer’s Manuscript in 2015.

The church purchased the printer’s manuscript from Community of Christ for $35 million in 2017.

Author Jim Forest, chronicler of giants like Day and Berrigan, reinforced many