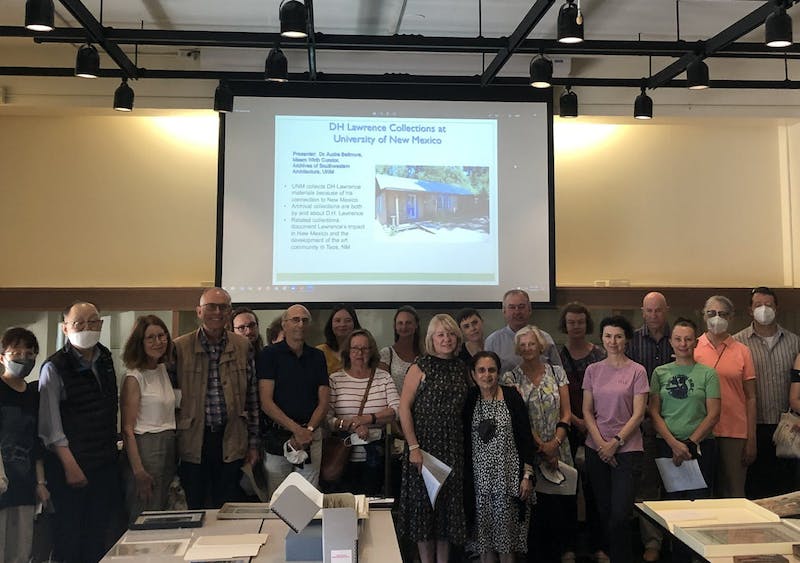 On Monday, July 18, the University of New Mexico Southwestern Research Center hosted more than 40 scholars and enthusiasts from around the world in the West Wing of the Zimmermann Library for the opening event of the 15th International DH Lawrence Conference, celebrating the life and work of the first English writer of the 20th century.

The conference takes place every three years in different places relevant to the author and his writings. For Feroza Jussawalla, professor emeritus in UNM’s English department and an expert on Lawrence, the lecture is a good reminder to UNM students and faculty of the value the author brought to our state, which Lawrence considered as a space for a potential utopia.

“I think it’s very important to teach students about DH Lawrence, because he was kind of an immigrant to New Mexico…Lawrence designed this northern New Mexico as a kind of utopia called Ranonym; he wanted to create a kind of utopian community… He was trying to bring everyone together,” Jussawalla said.

This year, the UNM-owned DH Lawrence Ranch in Taos, where the author lived for 11 months with his wife while working, will host the majority of the conference. Audra Bellmore, associate professor at the Center for Southwest Research and curator of the John Gaw Meem Archives of Southwest Architecture, hopes the conference will reaffirm to UNM the importance of the preservation work they do at the ranch.

“I hope UNM will show some commitment to the preservation of the ranch going forward,” Bellmore said. “It’s really great for UNM to realize that they have these important things and to really understand the importance of our ranch ownership, and to really understand how we can use that for outreach and draw from that. party – to really connect with scholars and with visitors from all over the world.

Part of the value the conference brings, according to Jussawella and Bellmore, is the increased international attention it brings to New Mexico, the ranch, and the archives. With more than 100 guests expected at the ranch next week, including a number from foreign countries, they hope to show the world what New Mexico has to offer.

“This conference is particularly important because it is an international conference. It brings together scholars from around the world with the DH Lawrence International society. We take them around campus, showing them our great collections…Maybe they’ll come back and visit us on their own to research the archives,” Bellmore said.

Conferences like this also serve to augment the archival content of CSWR, which aims to collect all relevant material on DH Lawrence that it can for preservation and research purposes. Paik Nak-chung, an international guest and professor emeritus of Seoul National University in Korea who has studied Lawrence since his undergraduate studies and wrote his thesis on the author at Harvard in 1972, donated two books that he had written about Lawrence to the growing collection.

“One of the books is in English. This is a related publication of my PhD. dissertation… The other book is in Korean – published just two years ago – which kind of sums up my decades of research,” Dr. Nak-chung said.

After Lawrence’s death, his wife Frieda Lawrence donated the 166-acre ranch to the University, alongside a range of other possessions. This action launched the massive archive of Lawrence partially presented by the CSWR during the opening.

The conference will continue until July 23. Students interested in viewing items from the collection can contact the Center for Southwest Research.

Spenser Willden is the culture editor of the Daily Lobo. He can be contacted at [email protected] or on Twitter @spenserwillden