Having your book reviewed in the New York Times gives an author bragging rights. On Sunday, April 3 at 4 p.m., Fivesparks will host Erica Ferencik, whose recently released third novel, “Girl on Ice,” earned her those rights. She will read a brief selection from the book, talk about its setting and how she came up with the idea, and describe her writing process.

In a recent phone conversation, Ferencik told me how she happens to be speaking at Harvard. She and her husband, who live in MetroWest Boston, love exploring new places to walk, and they love coming to Harvard and stopping by the General Store. During one of their visits, they struck up a conversation with Jared Wollaston, who invited them to his home on Elm Street. Learning that she is a writer, Wollaston spoke to Ferencik about Fivesparks and encouraged her to contact board chairman Mark Mikitarian and events manager AnaMaria Nanra. Ferencik said she works seven days a week, 12 hours a day to promote her book, so she was happy to schedule a talk at Fivesparks and put her book up for sale at the event through Silver Unicorn Bookstore in Acton .

A characteristic of Ferencik’s novels is the menacing setting in which the action takes place and the way nature becomes another character in the book. Ferencik travels to the places where she sets her story and fully immerses herself in the beauty and dangers each has to offer. Her first book, “The River at Night,” is set in remote Allagash Territory in northern Maine, sparsely populated mostly by men living off the grid, she said. The Peruvian jungle provides an exotic setting with deadly dangers for “Into the Jungle.”

For “Girl in Ice,” Ferencik spent a month in Greenland, which informed the real and compelling descriptions of the surroundings in what she called her best book. The protagonist, Val Chesterfield, describes “the enormity…a vast field of ice where black mountains loomed on the horizon like crests of waves frozen in place.” There are “stories-high icebergs, each a sculpture carved by a lunatic” and under the ocean, “the inverted mountain, unbearably exquisite and strange”.

Ferencik said she always had an affinity for these places that no one who hadn’t been there could imagine. She wants to bring nature to people in all its beauty and stunning beauty. “But,” she laughs, “I’m not a tour guide.” She said it’s these extreme environments that “bring out who you really are.”

In “Girl in Ice”, a small group of scientists work at a climate research station on an uninhabited island off the northwest coast of Greenland, where temperatures drop well below freezing and “the wind has expressed its rage, the building rattling like a toy.” They are locked together, all with their sorrows, ambitions and secrets. As one character puts it: “No normal people come here. This place is just a natural selection for people who want to jump from the end of the world.

A girl was found frozen in the ice, legs in a running position, “eyes frozen in terror”. They pulled her out of the glacier, and when her body thaws, she’s alive, but no one can understand her speech. Clearly, she is traumatized. The sister of one of the scientists – a man who was found frozen to death outside the station one morning – is a linguist, and the chief scientist asks her to come and decipher the girl’s language – and the reason for her terror . Val is on medication for severe anxiety, but she wants to help and that, along with her desire to learn more about her twin brother’s death, compels her to go despite her fears.

Ferencik’s novels have mystery and suspense and are often described as “thrillers”. She said she wasn’t trying to break the mould, “I’m just trying to write the best story I can.” She prefers to classify her books as suspense literature because, she says, it’s still “human history.” In an online written interview, one of his advice to writers is, “Don’t be afraid of painful situations or emotions,” and another, “Love or empathize with all of your characters.” In “Girl in Ice”, suspicions, loss, desires and guilt create tension between the characters, and Val, despite her knowledge of many languages, including Old Norse, grows increasingly frustrated with her inability to to understand the girl, Sigrid.

Ferencik explained his advice to writers to “maintain the fear” by saying that we all live in fear every day. Stories help us survive it. We see a character living in terror, and how that character handles it helps the reader handle theirs. For those at the station, it’s the dread of the dangers of the environment and the race against time. Every day brings fewer hours of light, and it will soon be polar night with temperatures below 60 degrees, and they will have to go outside. For Val, the fear is to fail, she won’t find Sigrid’s secret in time.

Ferencik’s fear of climate change is present in the book. She sees a fine line between what is real and what is not real. The howling winds from the glaciers cause severe drops in temperature. Was there a time – and there still will be – when freezing winds, even in different parts of our own country, could freeze a person to death in a minute? 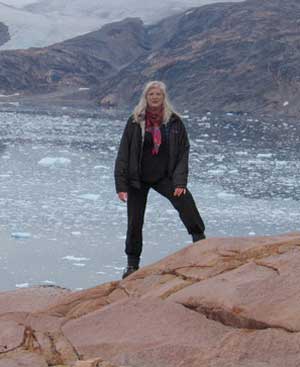 Erica Ferencik on a research trip to Greenland. (Courtesy picture)

Ferencik talked about his process as a writer. First comes an idea; she has to check it out to see if it “has legs” and second to wonder if she can be passionate about it for the years it will take to develop it. Elsewhere, she said the power of observation is most important for a writer – and for a comedian, which she has been for 10 years. (There’s no room for real humor in “Girl in Ice,” but a few euphemisms from Val provide some comic relief.) It’s an observation she made on a freezing winter’s day when she was walking in the woods near her home which led her to the idea for ‘Girl in Ice’. She saw something remarkable, and her imagination took off from there.

She also said she thought the idea of ​​”Girl in Ice” was lurking in her subconscious ever since she saw the movie “Frankenstein.” We agreed on the phone that the near-last scene where, across a vast expanse of frozen Arctic sea, the battered and bloodied monster heads north, is an unforgettably sad and haunting image. She said it started her fascination with Norse stories.

Once she has the idea, she begins “scaffolding”, methodically making a very detailed plan of the whole story and then, over a period of about six months full-time, a first draft. She needs to have the story first, so that when she goes to the setting where the action is, she can be selective in what she is looking for. Although she set the story up before she discovered the river, jungle or ice, she said she leaves herself open to “wonder and surprise”. She reads a lot of books and has to be careful not to get carried away with research. In “Girl in Ice”, just the right amount of fascinating information about language emerges from Val’s work with Sigrid. (Greenlandic has 170 words for “ice” and two dozen for “fear”.)

Ferencik scoffed at the idea that a writer could be redirected by a character in his book. “Characters don’t come to life,” she says. “I made them up. The writer is responsible. She said that while some writers may have sudden inspirations, she writes a book like building a house – everything is planned in advance. The ending is the most difficult – it must be “surprising and inevitable”. The climax of “Girl in Ice” is both, and the terror is palpable.

‘I realize I only wrote one word – poo’: what happened when I was a Newsround presenter for a day | Children’s television