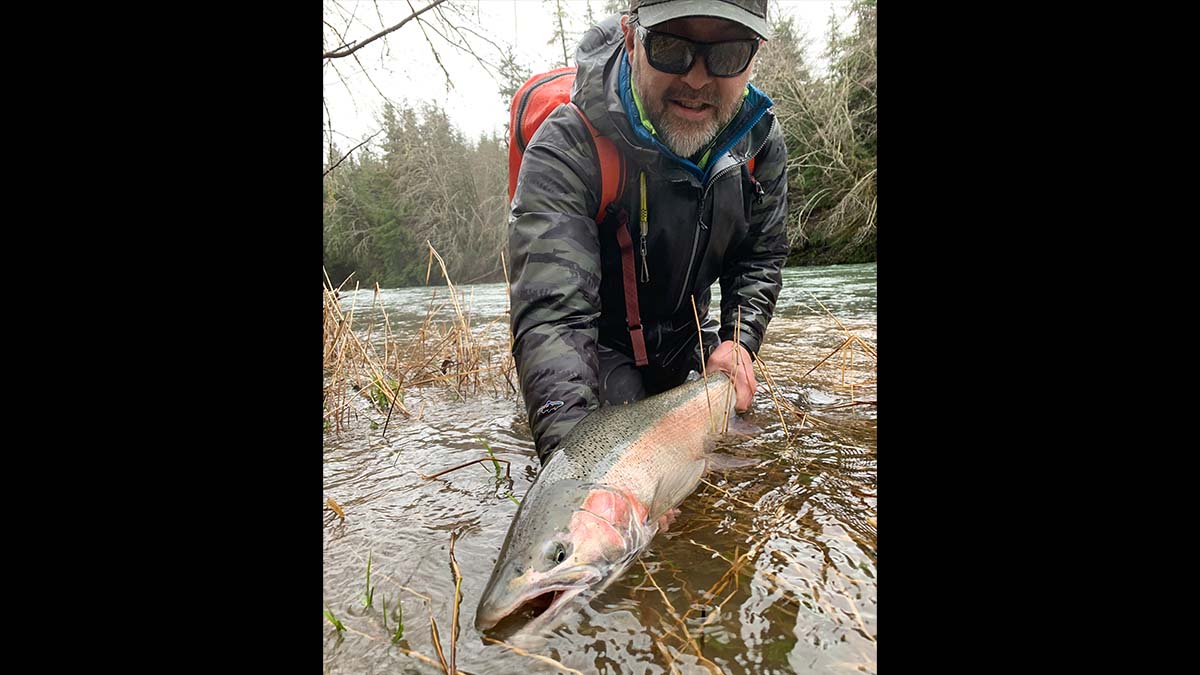 Dylan Tomine is a passionate conservationist and rainbow trout fisherman. His new book Headwaters: The Adventures, Obsession and Evolution of a Fly Fisherman merges these two passions. In it, Tomine weaves stories of personal adventures with the threats wild rainbow trout face in North America. It is both a deeply personal book and one that addresses larger issues facing the fishing community in the Pacific Northwest and beyond. We recently had the chance to sit down with Tomine to discuss his angling adventures, his songwriting process, the future of steelheading, and more.

Can you tell me about your first steelhead?

At the start of the second year, my mother asked around town and found a very well-known Steelhead guide – Andy Landforce. She tried to book an appointment for me to go fishing with him, but he was already booked. In December of that year, well into my second year without catching rainbow trout, he called on a Tuesday night and said, “Hey, can you miss school tomorrow? I have a cancellation. My mother said yes. Probably seven minutes into the float I hooked my first rainbow trout and landed it. It was one of the great moments of my life.

I remember reading about your mother studying in the car while you were fishing. It was awesome. So what is it about rainbow trout that has made them the center of your angling life?

What is so miraculous about rainbow trout is that they provide this opportunity to catch saltwater fish in trout streams. Also, from an early age, I fell in love with fishing techniques for them and the places where they live. There’s this long history of romance around the fish from every Hollywood star who would fish them in California to the steelhead legacy of the Pacific Northwest. Steelheading really captured my imagination.

You originally moved to Seattle to fish Skykomish. What was so special at the time?

Trey Combs had just published a book called “The Steelhead”, which most serious anglers now call “The Bible”. He profiled all the major Steelhead rivers, and the Skykomish was the closest to where I could make a living. When I moved there, I was living in an apartment in downtown Seattle. I could fish the lower Skykomish in 45 minutes. At that time, the fishing was still very good.

Did he have the impression of witnessing its decline?

It was heartbreaking – and still is. That spring season on the Skykomish that I’ve built my whole life around closed in 2001 and didn’t reopen. Every year in March, when I normally prepare to go fishing, I still feel those pangs of loss.

In your book you explain all the problems facing rainbow trout – it’s death by a thousand cuts. But, if you had to choose, what would be the biggest threat they face?

The one thing that would be easiest to fix would be to stop funding rainbow trout hatcheries. In many of our rivers, the limiting factor to rainbow trout recovery is hatchery programs.

Do you think people are becoming more receptive to that?

The scientific evidence is so compelling that people are bound to pay attention to it, but there is a lot of politics involved. Guides and outfitters don’t want hatcheries to go away. Tribes rely on hatchery fish for treaty rights, which is completely legitimate. But it’s still the easiest thing to change because we really don’t have to do anything, just stop wasting the billions of dollars we’re wasting on hatchery production. But politically, it is not easy.

Are you hopeful for the future of steelheading on the west coast?

I have cautious hope. A lot of things will have to change, but I think it’s possible that with enough hard work, we can get there. This will require a combination of litigation, legislation and public relations. The basic psychology around hatcheries is so intuitive – if we put more fish there, we should get more. It’s hard to fight this, even though all the science shows that when you put in more fish, you get less. Never have there been so many juvenile salmon and rainbow trout in the Pacific Ocean, and never have there been fewer adult fish returning to the rivers. This is largely due to hatchery discards. I’m not super optimistic, but there’s enough chance to change the things that are worth fighting for.

In your book, you write about adventures in special places. What was your favorite trip?

It’s like asking who your favorite child is. The place I most look forward to returning to – and returning to again and again – is northern British Columbia. In many ways, the Skeena River system is like my home river, even though it is 1,600 miles from where I live.

You have to travel to places that may have never seen a fisherman before you go. Do such places still exist?

Absolutely. I think they’re out there, and it could be as small as a little creek upstream near you, or some far off place.

I liked your essay “Steelhead, Love and Other Mysteries”. What was it like writing about a relationship and fishing at the same time?

You don’t see a lot of love stories in fishing books. So much of my relationship with Danielle was in the context of fishing as it seemed like a natural way to tell our story. But I had to think a lot about it because there was no easy model to replicate.

Let’s say you’re on one of your favorite trails on the Skeena River system, what do you latch onto?

It depends on the water conditions. If it’s high and dirty I would use a big intruder style fly. If it’s low and clear, I’d fish something really small and brown, like a size 6 buggy. If it’s just perfect, I’d fish a two-inch black woolly bugger.

This interview has been edited for clarity and conciseness.

Acknowledgment of genocide by the pope, exchange of needles in prison: in the news of August 2