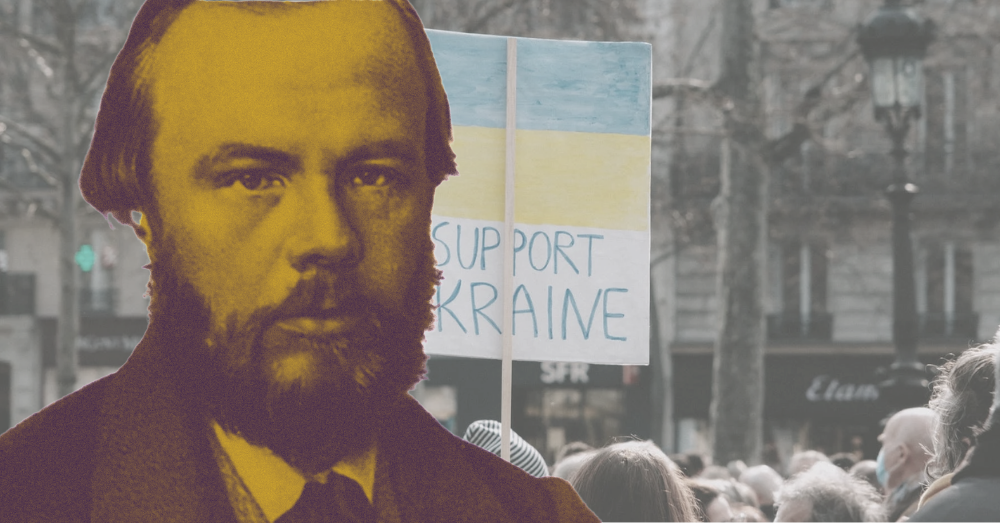 Recently, an Italian university banned the great Russian author, Dostoyevsky, in a typical knee-jerk reaction to the ongoing Russian-Ukrainian conflict. The conflict culminated in the invasion of the former by the latter and immense human suffering that followed. Countries are rarely expected to take a more nuanced approach to easing crises of such magnitude.

Instead, we find innocent artists becoming convenient scapegoats. As if the responsibility for the wars rested on the offices of those who defend emancipation and whose sensibilities bring us closer to deciphering the laws of nature or our psyche in apparent chaos and real disorder.

Fyodor Dostoyevsky is often considered one of the greatest writers of all time. its famous “Crime and Punishment” explores the existentialist realm through the story of the protagonist Raskolnikov. Raskolnikov’s scarcity leads him to commit a crime while still ruthless, to determine if he did it “consciously”.

And many complex themes alternate between relationships, questions of morality and alienation, guilt and punishment. Dostoevsky’s novel is a masterpiece as it explores the psychological realm while going through the stages of committing a crime and a sentence. The latter occurs near the end of the book.

Between the two, he ventures into the gray areas to bring out the human suffering, the complexities and the absurdities that give humanity to the character. Even the readers’ iron hearts melt and grow on that of the protagonist, sympathizing with his afflictions. We are not just shades of black and white. There are so many shades of gray around us.

Dostoyevsky was not an advocate of invasion in any of his works. Nor did he knowingly or otherwise write about such a sketchy concept as Kipling’s “great game” that acquired geopolitical proportions in the hands of opportunists.

In his iconic work which has influenced many great men and women, “The Karamazov Brothers”, a recurring theme was forgiveness instead of retribution and the sanctity of all human life. It is therefore pertinent to ask why writers should be victims of war between nations, especially when they have the potential to bridge the broken halls and bring us together in a common thread of humanity.

And it’s not even the first instance of censorship. The Inquisition of medieval/pre-modern Europe had banned certain books that were supposed to offend the religious or moral orders of the authorities. These books were put on a banned list or often burned, and writers who did not comply were declared heretics and sometimes burned alive in the penultimate stages of the inquisition.

The Renaissance challenged Roman Catholic notions, especially in the realm of science, by pronouncing heliocentrism instead of geocentrism as scientific truth. But, of course, the religious authorities did not like the idea and put such works on the banned list.

The famous trial of Galileo Galilei is a good example. Who later had to accept geocentrism with whispered defiance “and yet it moves” (e pur si muove), now a legendary saying. Renaissance scholar Servetus was burned at the stake for heresy.

Even poetry, often considered the highest form of human expression, has not been spared. Charles Baudelaire must face the wrath of moralists. On the contrary, poets have been regularly accused of having violated the canons of morality.

In modern times, the British have banned books like Gandhi’s Hind Swaraj and works by Kazi Nazrul Islam. Similarly, Dayanand Saraswati’s Satyarth Prakash was banned by the Pakistani government. Khalid Hosseini’s kite runner has been banned by the Iranian regime.

Salman Rushdie and Taslima Nasreen are authors driven out of their own country. The Nazis burned books that did not resonate with their ideas. Book burning has become a common form of expression protected by some countries as freedom of speech and protest.

But what about “freedom to read?” Why shouldn’t individual choices and tastes be respected rather than dictated?

The censorship of authors and their works is a recent creation. We have had a history of conflicts between sects and philosophies in our ancient past. There have been schisms within heterodox sects like Buddhism and Jainism and fierce debates from supporters on either side.

Bhakti Sufi traditions challenged orthodoxies. Yet the examples of burning books, targeting authors, or running them from pillar to post to save their own lives did not exist. Even rulers like Feroze Shah Tughlaq, who persecuted non-conformists, preserved and translated ancient Sanskrit scriptures during his expeditions.

After the arrival of the British, a “Victorian morality” gave credence to the prohibition of things that seemed “vulgar” or “obscene”. Sensuality became a target, and so the earthly-looking, half-clothed, smiling, and voluptuous Hindu gods and goddesses were seen as obscene as opposed to airy, loosely clad in the holy faces of Christian gods and angels.

The typical Eurocentric bias towards cultures and ethos was at odds with theirs. The connection between the deity and the artist was oldest in the realms of the private sphere (and therefore differences in the iconographic details of their depiction). It becomes a project in the public space by commissioning works and censoring anything that deviates from iconographic norms.

A deification of women as pure and obedient gained prominence. Any aberration was condemned as meaning “lax morality”. For example, many anonymous writers and poets were women, perhaps the famous poet “Anon”, who wrote breathtaking poetry under a pseudonym and died anonymously.

Thus, each book and each author is precious. Even if we dissociate ourselves from their views, they must not be condemned to a state of obliteration. Most writers imprint their own experiences and personalities into these books. We may never know the impact they can have on someone struggling with similar insecurities who eventually find solace in the characters or pages of a book.

French Nobel laureate writer Romain Rolland once said: “No one ever reads a book. He reads through books. And yet writers are made to suffer. Walter Benjamin committed suicide on the borders of Spain and Portugal. Dostoyevsky was sentenced to death for his radicalism and spent time in exile.

The whole world is their home. They transform the borders of nations and states and are the treasures of humanity. They are the legacy of a great civilization without limits of time and space. And must be preserved at all costs. Every author deserves a shelf, not a shell.