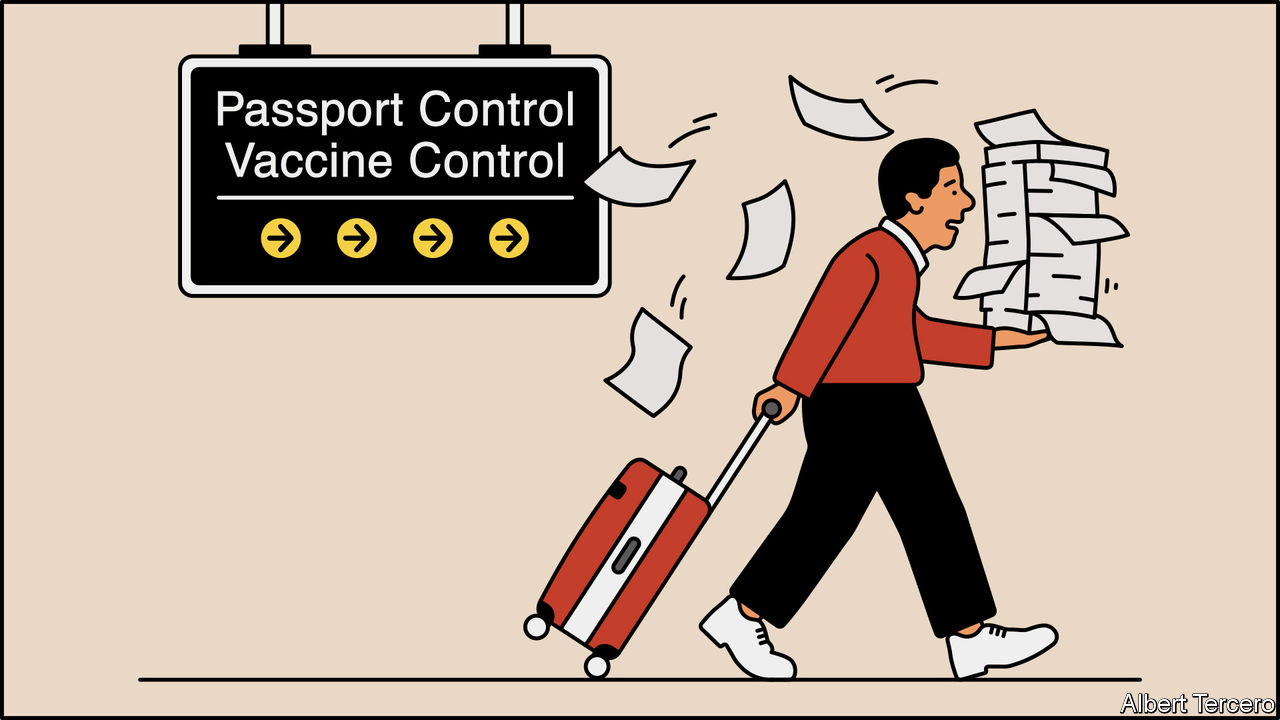 Letters to the Editor | The Economist

Enjoy more audio and podcasts on ios Where Android.

Letters are welcome by e-mail at [emailÂ protected]

Your article on vaccine passports mentioned a paper â€œyellow cardâ€ that the World Health Organization has been publishing for 30 years (â€œHard passâ€, October 30). This document contains the international certificate of vaccination or prophylaxis (ICVP), which is recognized by all countries, unlike country-specific covid-19 certificates. The WHO is working on a digital version of this. In the near term, the paper booklet will be revised to include an additional section on lab results aimed at providing a universally accepted tool for international travel.

Currently the WHO does not recommend that countries require proof of covid-19 vaccination as a condition of travel, given limited and uneven access to vaccination around the world. However, travelers can be provided with an international certificate on the model of the ICVP to document that they were inoculated with one of the vaccines that received WHO approval for emergency use. Measures such as testing or quarantine could be relaxed for vaccinated travelers, based on the risk assessment of each country and WHO advice.

A matter of numbers

“The math wars” (November 6) has precisely highlighted a serious problem of American competitiveness and national security resulting from the poor quality of mathematics education. You have discussed the teaching methodology at some length, but the real problem is the quality of the teaching. Teachers are poorly paid. An engineering or science graduate can earn twice as much in the private sector.

Poor quality education in mathematics, science and technology has far-reaching consequences. I came to America a H-1B visa because my employer could not find an American with my skills. Visit any engineering office or laboratory now and you will find that about half of the workers received their primary and secondary education in a foreign country. Relying on immigration to fill the gap has worked so far, but America is becoming less attractive as a destination for a variety of reasons, making it more difficult to attract these skills.

Regarding the conflict in Western Sahara (“The disputed desert”, November 6), the demand of the Polisario Front, which claims independence, to control 20% of the territory is a flagrant violation of the ceasefire agreement of 1991, because the UN repeatedly noted. Under the agreement, 80% of the territory remains under Moroccan control and 20% is designated as demilitarized buffer zones.

It is true that Western Sahara under Moroccan domination is booming. The subsidies primarily target Saharawis, and not just non-Saharawis from other regions of Morocco. On the other hand, the Saharawis in the camps on Algerian soil are stored against their will. They are considered refugees but they do not have the right to move freely or engage in a gainful activity, nor to be counted and identified, as stipulated in the Geneva Convention and required by the UN Security Council. The Polisario receives 134,000 daily food rations from the World Food Program, but aerial images and evidence on the ground suggest that the number of people in the camps is less than 90,000. The European Anti-Fraud Office has accused the Polisario in the past of having diverted rations and having sold them on the black market, with the help of Algerian military officers.

The war will only make an already dire situation in the camps unbearable and explosive. Morocco tried to call on Algeria to open channels of dialogue. The leaders of the two countries owe it to their populations and to future generations to think about peace and not war, prosperity instead of belligerence. Those who beat the drums of war would drag the region into a conflict where everyone would lose.

LAHCEN HADDAD
Minister in the Government of Morocco, 2012-16
Rabat

The elephant not in the room

China throws nearly 30% of global carbon dioxide emissions into the atmosphere, yet you called the prime ministers of India and Australia and a senator from West Virginia cowardly on fossil fuels ( â€œCop outâ€, October 30). Xi Jinping did not even show up to the COP26 summit in Glasgow. China continues to increase its capacity of coal-fired power plants.

A largely overlooked legal question associated with global warming is how international agencies and the UN in particular, should deal with flooded states; small islands and low lying countries that will likely be inundated by 2100 due to rising sea levels. Much has been said about relocating people from these places for their safety, but no attention was granted the legal status of those states without sovereign territory to govern. Will they continue to benefit from the votes in the UN and other global agencies?

Your analysis of American policy is bleak (â€œOne Year Later,â€ November 6). Joe Biden’s hugely popular social, infrastructure and climate programs apparently fall short of the challenges. The party of liberalism, diversity, education and popular vote is mathematically doomed in the elections. Only Donald Trump remains to fulfill the prophecies and return in 2024 with a Republican majority in Congress. Can a future edition give us details on how to emigrate to Canada? Or better yet, provide a path to redemption?

The French addiction to acronyms extends to gastronomy (“PFUE? MDRÂ», October 30). Acronym AAAAA on the menus marks the origin of the stuffed intestines approved by the Amicale des Amateurs d’Andouillette Authentique Association. I like to think of the abbreviation as a bit ironic.

The Dutch dominate the league of European abbreviations. Theirs cover the whole spectrum of political parties (PvdA, D66, PVV, VVD) football clubs (NCA, CNA, VVV, MVV, from A to Z). And the Netherlands surely wins the award for the world’s silliest name for a football club: Go Ahead Eagles.

The essential characteristic of an acronym is that it can also be pronounced as a word. This was clearly understood by Admiral Ernest King when offered the post of Commander-in-Chief of the we fleet by Franklin Roosevelt shortly after Pearl Harbor. He agreed, but requested that the acronym for the post, VSinJUICE (“Sink us”), to be replaced by VSOminVSh.

This article appeared in the Letters section of the paper edition under the title “On vaccine passports, math, Western Sahara, climate change, Joe Biden, French acronyms”