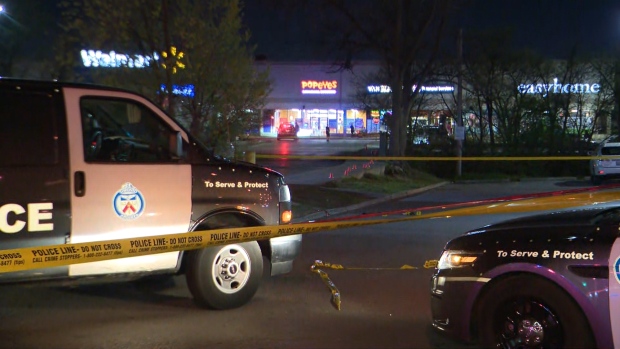 A man has died following a shooting in a busy North York square, Toronto police confirm.

Emergency crews were called to the Jane Street and Wilson Avenue area shortly after 8:30 p.m.

Police said they located a man with gunshot wounds and his injuries appeared to be life-threatening. Emergency crews attempted to revive him but he was pronounced dead at the scene.

“I don’t think there’s an immediate threat to the community right now,” Duty Inspector Paul Krawczyk told reporters. “I know this is a very busy area and so I plead with the public that anyone who may have dash cam footage or other footage that was in this area around 8:30 a.m., that she provide them to the police.”

There is no word as of yet on the possible suspects.

The shooting took place when many people were shopping in the area and Krawczyk called the killing “brazen”.

“It’s very cheeky. It’s worrying. And every time you see that, you know I could have my family here shopping, right? ” He said. “So this is very concerning and we take this very seriously and we will investigate this as well as we can to have a positive outcome.”

Police are urging anyone with information to contact investigators or call Crime Stoppers anonymously.

Editor’s Note: This story has been corrected to show that filming took place in North York