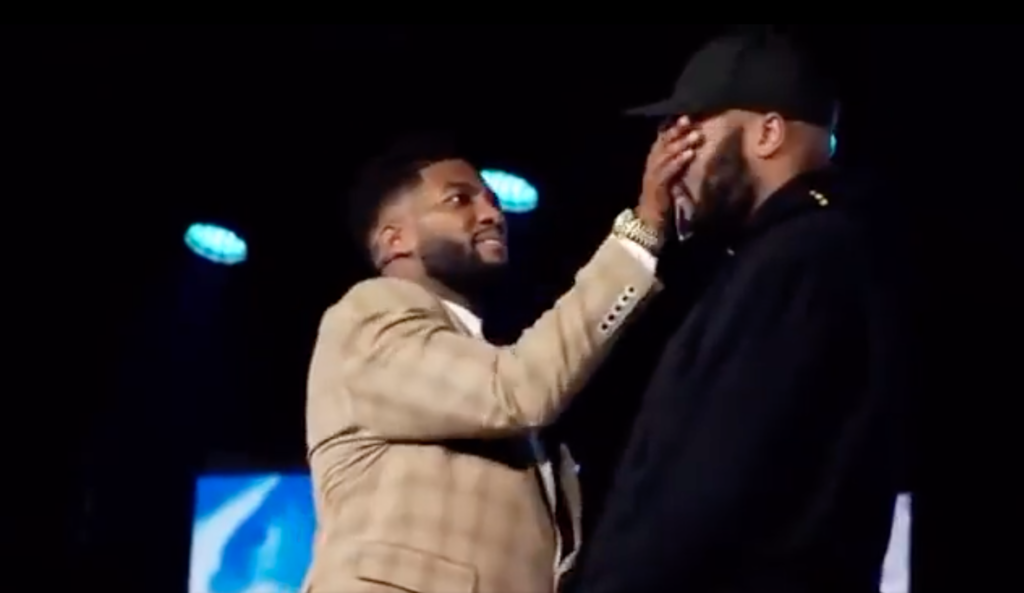 An Oklahoma church leader rocked the internet on Sunday after a video of him rubbing saliva on a man’s face during a sermon went viral on social media.

Pastor Michael Todd of Transformation Church in Bixby, Oklahoma, stood onstage with a man who was reportedly blind when applying bodily fluids. Some of Todd’s supporters have claimed on social media that the blind man is Todd’s brother.

Todd referenced a Bible story from the New Testament about Jesus healing a blind man during his “Vision Sunday” sermon. The pastor’s message to his congregation was to maintain faith in God’s vision and process even when it gets “wicked” or seems absurd.

Todd’s skill came to a head after he coughed up phlegm and spat it into his own hand.

“What most people would do is turn away,” he continued, coughing up more phlegm before spitting into his hand once more. “What I tell you is just as [the male congregant] stands here physically knowing what is coming, God says, ‘Can you physically, spiritually, and emotionally be able to handle it when going into the vision and receiving it might become unpleasant?’

“Receiving a vision from God can become unpleasant,” Todd added. “I just bought my dream car. And now you gonna ask me to sell it and get in the hoopty again? Yeah, because the vision I’m about to give you, it might get nasty .

At this point, Todd smeared enough saliva on the man’s face to leave snot hanging down one of the man’s cheeks. Onlookers in the church congregation groaned as the display unfolded.

“Do you hear and see people’s responses? Todd asked. “What I’m telling you is how you just reacted, it’s how the people in your life will react when God does the right thing for the miracle.”

“I had never heard of ‘Pastor’ Mike Todd before today,” Atlantic writer Jemele Hill tweeted Sunday night. “But I really understand now why the elders often told us that we are in the last days.”

“Unless you are the black Jesus himself and can prove it with a papyrus birth certificate, what you will NOT do is…. I’m disgusted,” Reign tweeted.

But some of Todd’s followers defended his actions on Facebook.

“That’s why so many people miss their miracle or blessing because it didn’t go as planned,” said one Facebook user. Kimberly Glover Vaughn wrote in the comments section of one of Todd’s latest Facebook posts.

“By the way, it was his brother and I’m sure they had a conversation before,” Glover-Vaughn added. “In addition to who are we to decide how God speaks to Pastor Mike and what instructions he gives him[?] Also it’s that the only thing you remember is that he preached a bomb message don’t get stuck on the object lesson[?]”

Todd is also the New York Times bestselling author of “Crazy Faith: It’s Only Crazy Until It Happens”. He did not address his spitting controversy in a Martin Luther King jr. Message of the day to his Facebook followers on Monday.

“When God gives you a dream or a vision,” Todd wrote, “the power is not just to ‘see’ the dream…or ‘say’ the dream…but the power is to ‘serve’ ‘ the dream ! …
“Grateful for Dr. King’s legacy of life and learnings!” he added. “I’m living his dream!”

In the face of hatred, MLK’s advice? Love it anyway.