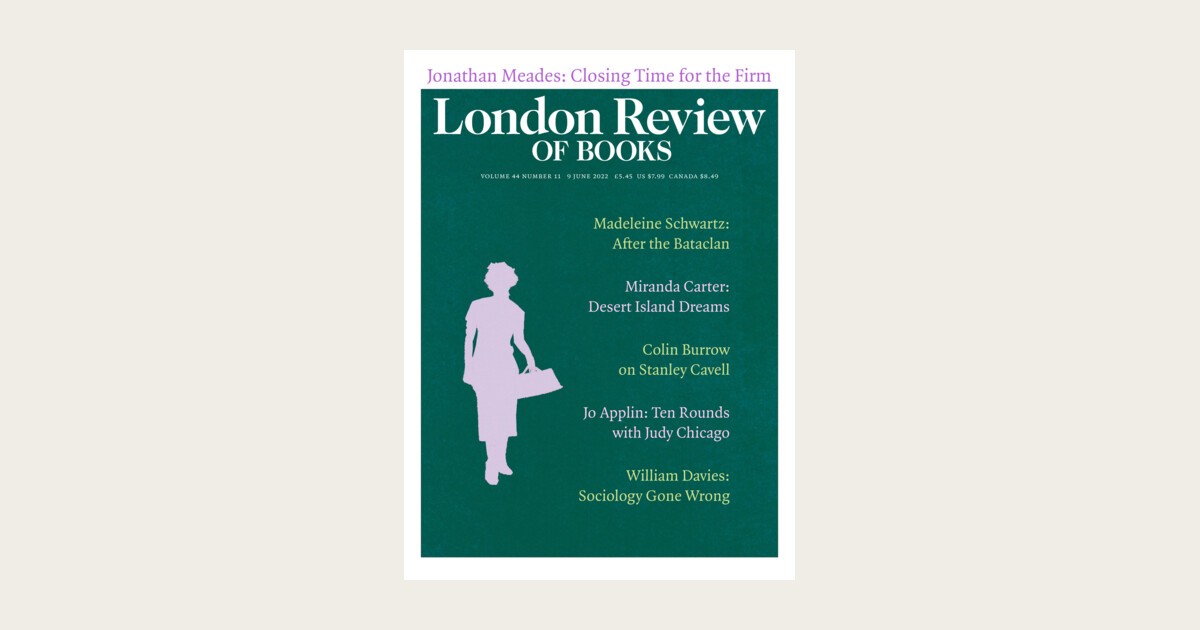 OnotOn April 28, a memorial stone for asbestos victims was unveiled in the town square in Barking, east London. The date was chosen to coincide with International Workers’ Memorial Day, inaugurated in 1989 to draw attention to those injured, disabled or killed in the course of their work or as a result of their working conditions. Many people in Barking still remember Cape, an asbestos factory that operated between 1913 and 1968, whose legacy lives on in the extremely high rates of mesothelioma and other asbestos-related cancers in the area. Ilona Sagar’s movie The body shot (2022) extends the definition of “working conditions” beyond the factory and into the home. Her interviewees describe cheap home repairs that left asbestos in apartment walls and ceilings, and women exposed to carcinogenic fibers when washing their husbands’ overalls.

Sagar’s film, along with new commissioned works by Sonia Boyce, Helen Cammock and Rory Pilgrim, is part of Radio balladsa group exhibition that has just completed a tour to Serpentine North and Barking Town Hall (in the same square as the new memorial). The body shot shares his name with one of the originals Radio ballads, a series of radio documentaries produced between 1957 and 1964 by producer Charles Parker and musicians Ewan MacColl and Peggy Seeger, and broadcast by the BBC. These documentaries interspersed interviews and field recordings with original songs, composed by Seeger and MacColl, which drew their lyrics from the words of those interviewed, including migrant laborers building the M1 and herring fishermen on the coasts of Norfolk and England. ‘Scotland. The body shot, broadcast in 1962 and later released as an album, departed from the focus of the rest of the series on working life. His interviewees were united not by class or profession but by disease: Parker recorded the voices of people hospitalized with polio, many of whom are paralyzed. At the Serpentine, a CD by Parker, MacColl and Seeger’s The body shot was placed in a display case with a piece of serpentinite – the rock from which chrysotile asbestos is extracted – on loan from UCL’s Department of Earth Sciences. These artefacts are surrounded by books and pamphlets including a history of Cape Town and The asbestos risk manual (1995).

New Radio ballads is the result of a three-year engagement between artists, social workers, service users, campaign organizations and other bodies in Barking and Dagenham. It is produced by Serpentine’s Civic Projects and New Town Culture, an ongoing curatorial program which, rather than bringing artists into a community to create temporary projects, seeks to recognize the creativity inherent in care work. Artists are collaborators rather than ethnographers. A gallery exhibition, with all its conventions of space and viewers, is often where the tensions of socially engaged art such as this are most apparent, particularly when the intention is to put a concept into practice. such as care, instead of treating it as a theme. , something to make art about. How to show the intangible things that happened to make the cohesion of a group, the small actions and cumulative interactions? Who are we looking at in the photographs and videos? Are they performers, participants, subjects? Who does the editing? Where is the art, what piece is the art? These are not new questions, but they bear repeating.

One answer is to have ample documentation. The exhibition booklet asks “What are the sounds of care? yet the gallery is cluttered with images and objects to look at, in addition to the dominant screens. Near the research papers compiled by Sagar to accompany his film is a huge spider diagram that shows the connections between artists, curators, organizations and the broader infrastructure supporting Radio ballads. Framed sketches, letters and paintings by Rory Pilgrim and members of Green Shoes Arts, the Dagenham-based community arts organization he worked with, emerge from the centerpiece in which Pilgrim’s film Rafts – an ornate hour-long song cycle incorporating poetry, animation, monologue and dance – is installed; the room itself contains small sculptures and a set of rocks collected by Eddie Paggett, a painter who appears in the film reflecting on “care and precision”. Helen Cammock builds an informal archive and study space around her film Bass Notes and SiteLines: The Voice as a Place of Resistance and the Body as a Place of Resilience. A banner embroidered with the words ‘traverse’, ‘agitate’ and ‘witness’ hangs above a table filled with books by Stuart Hall, Donna Haraway, Audre Lorde and other social theorists and critics, as well as texts about nursing, childcare and working. (Cammock set up a similar reading table in his Turner Prize-winning installation The long note from 2019, a project that examined the history of women’s activism in Derry.)

But who can say that other things than sounds cannot be heard? In her voice-over narration, Cammock quotes Tina Campt, whose work advocates sonic engagement with imagery. Campt writes about “the sound frequencies of daily practices in black communities”; these frequencies often go unnoticed, but for Campt, and for Cammock, this is their potential – in Campt’s words, they are “everyday practices of denial”. Among his other images, text, and objects, Cammock displays a row of small wavy line drawings on colored paper; in his film we see – and hear – the creation of these works as part of a meditation exercise for social workers. Music plays in the background. These drawings are also recordings, capturing and recording sound.

Image taken from “Bass Notes and SiteLines” by Helen Cammock (2022).

The women in Cammock’s film all work for or are users of Pause, an organization for mothers whose children have been (or may yet be) removed from their care. We see them – the social workers, the mothers and Cammock herself – taking part in a singing workshop that ends with a co-written song. The camera searches for backgrounds and fragments, drawn to hands and feet instead of lingering too long on faces. One could see this as an aesthetic decision, distinguishing the artists’ moving image from traditional documentary, although the technique is now familiar on television as well. It is also, of course, a mark of respect for participants who fear being scrutinized and evaluated.

At Cammock bass notes, these two aspects are in play, but it also reminds us of how music is made: in pieces, provisional and incremental, and using the whole body. Voices try sounds, then notes, then phrases. Ideas are noted. A Pause worker says: “Music is life. Cammock also claims music: “Sounds can be contained in our body”. She wonders what music can do with the “numbness”, that is, the exhaustion of keeping busy without respite or support. The film suggests at least one answer: music can make time, which may be another way of saying that music is life.

Write about Radio ballads in 1981, Ewan MacColl described recordings of people and places as “the news”. The term is particular to radio, and perhaps to a certain era of radio, but it is useful here as well. For MacColl and his colleagues, recorded vocals were the raw material for songs; they were also what told the audience that what they were hearing was real. Radio detaches the voice from the body, but as listeners we get an idea of ​​a person, the person has a body that produces a voice, and the voice represents, at least to some degree, who they are. . We can then decide who they are in relation to us: a contract that asks to be broken in art. This is what Sonia Boyce tries in Yes I hear you, in which interviews with victims of domestic violence are broadcast on a four-channel short. A group of interpreters interprets the transcriptions. Unlike, say, the Clio Barnard film The Arbor (2010), in which the actors lip-synch to recordings of interview subjects, these interpretations are not revoicings but something looser and more open, closer to dance, choreographed and arranged in largely by Boyce’s smooth editing. We see hands tugging at a pair of protective gloves – signifying collaborative work in a pandemic – as we hear a woman’s voice on the phone with the police; she has to get a violent man out of her house. The performers sit in a circle and move through a black box theatre. They are dancing, shaking hands, standing still and smiling at the camera. Each also carries a body-mounted camera, providing exaggerated perspectives of the knees, legs, and hands. The accounts of abuse, read by actors to detach them from their original speakers, are distributed within the group, which functions as a sort of collective respondent.

Monitors showing Boyce’s film are mounted on wallpaper printed with a drawing of a shattered windshield. Boyce often does wallpaper for his installations. feel his way, this year’s entry for the British Pavilion at the Venice Biennale (where it just won the Golden Lion), is wallpapered in a kaleidoscopic pattern of colorful shapes and photographs of lights, microphones and other studio equipment – a background for the screens, which show improvisations and solo sessions by five black musicians. The Serpentine wallpaper makes its point more forcefully. Boyce wants us to see a connection between the cracks and splinters and multiple, repeated impact points on the wall and how violence reproduces and proliferates. In an adjacent room, quotes from some of his interviewees are reproduced in a series of prints, one of which reveals the origin of the windshield motif. It comes from a social worker who describes the broken windshield as an analogy not only for assault or destruction, but also for social responsibility: “It puts us all in the frame.