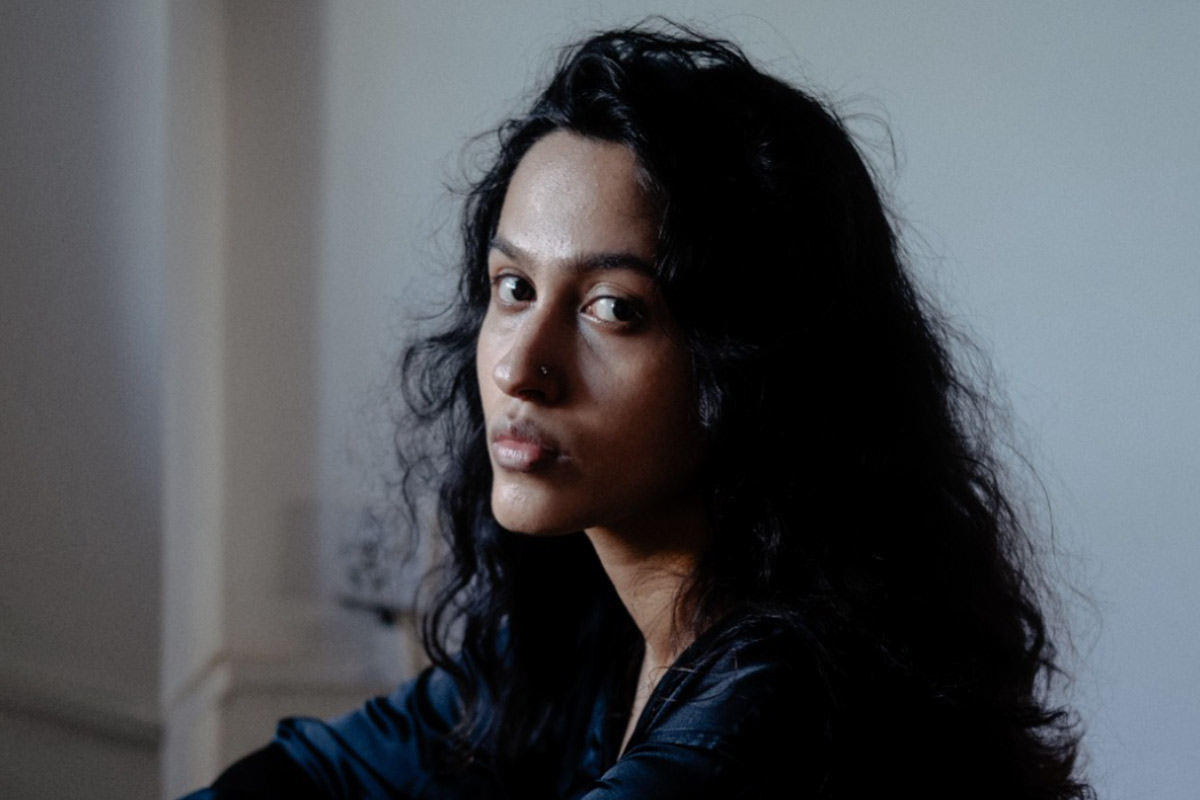 Teething is a story of trauma, memories and family: Intv with author Megha Rao

In an interview with TNM, Megha Rao talks about the world of her book ‘Teething’, its characters and plot, its process and relationship with craftsmanship, and more.

Kerala-based poet Megha, who has three books, tells the story of three children and the past traumas of their dysfunctional family, through poetry or ‘scattered memories’ as she calls it, in her latest book. Dentition. In the book, the confessional poet takes readers on a pleasantly heartwarming and painfully heartbreaking ride as her protagonist, Achu, recounts the aftermath of her brother Kochu’s suicide. What sets Megha’s book apart is that she unpacks complex themes like sexuality, homophobia, and healing from childhood trauma in 73 pages.

The book, like the city infused with poetry by Achu’s mother (Kochu’s older sister), is wet with fragmented memories and metaphors. If Achu carefully folds her mother’s poems into paper airplanes, sends them to the horizon where they become one with the clouds only to return as a downpour, Megha’s tale of growing up in a dysfunctional family through intimate poems is as scattered as rain through the book.

In an interview with TNM, Megha Rao talks about the world of Dentition, it’s the characters and the plot, its process and its relationship to the craft, the writing that moves him and more.

Why did you choose the title Teething?

I would like to believe that the experience of a book title is unique for each reader. When I wrote Teething, it meant the painful but crucial process of growing old. When I edited it, it meant the excitement of seeing your baby teeth replaced with adult teeth, the tangible validation of becoming a whole new me. And when I read it again after seeing it in print, it was like a rebirth. That you could lose your teeth as a child, and still have another chance at life. That there were second chances, come what may. It’s definitely open to interpretation too!

The personal and the political often intertwine while exploring complex themes like those you discuss in the book. Do you feel the pressure to be politically correct?

A lot of what I write is extremely personal, but I think the personal can also be incredibly universal. At the heart of Dentition is a trauma. The trauma of a child; the traumas of an entire family and the traumas of society. It is urgent to tell my story, which is a slice in the history of the world. Our meetings are so different, but there is this golden thread that runs through us all, that keeps us together. The way we bleed is really the same.

Are the characters in Dentition an extension of your own personality?

I was a bit like Kochu when I was a kid. His sister Achu’s anguished teenager was me in college. Molu’s fiery temper is my spirit animal. Their mother is me in my greatest vulnerability, completely devastated. I am their grandmother’s kindness, their grandfather’s devotion. I am also the lover, who mysteriously disappears. I’m dazed and naive, like Kochu’s bride. I am their euphoria, their grief, their bitterness, their innocence. But I’m not like the father, Sunny Kochachan. That doesn’t mean they’re unfamiliar; they’re people I know, but they’re just not me.

And many of Kochu’s experiences are not mine, and I refused to accept them. I was able to understand a character as complex as Kochu’s after real-life conversations with people who had similar experiences to him. This is why some of these characters are not written in the first person. This is why the book is written from Achu’s point of view. It’s his gaze, their world.

The book is full of references from Kerala, such as the titles of certain poems: ‘Coconut oil for trauma wounds’, ‘Gooseberry Pickle’, ‘Mattancherry Beef Biryani’…

I grew up in Kottarakkara and Trivandrum. Identities are shaped by environment, you can understand so much about a character’s story from their environment. When I was a child and had bruises, my mother always applied coconut oil to them. The solution to everything, just about everything, was coconut oil. I grew up believing it had magical healing properties. Susamma was a kind old woman I met in Vagamon, who caught me wandering around looking for a place to eat after returning from a pine forest. She wrapped rice, curry and pickles in a newspaper and gave it to me. She even asked her son-in-law to drop me off in her car because it was raining. It was brief, unforgettable. Beef biriyani has its own story. And of course the currant pickle is something my grandmother makes. She even makes pickle with this lololikka. We have a tree in our front yard.

When did you start writing Dentition and what is your process?

It took me about three years. But it picked up speed in early 2020. I plan the story, have the plot, characters, and setting ready before I dive in. From there, I write freely.

I write freely so that everything is raw, unfiltered, a spill trip. I don’t have a defined writing process. If you look at my room, there are sticky notes everywhere. I like my ideas levitating, hovering above me like fireflies as I open the conversation, dip my fingers into the narrative. I always pretend to be in a spaceship, looking at surreal creatures swimming around.

The book doesn’t have a linear timeline because I wanted memories to tell the story. Each poem is a memory. And put together, they create this beautiful montage, like a family photo album. I also wanted it to stay fragmented because that’s the story of traumatic events. There’s no timeline, you just go back and forth, ricochet here and there, with no defined structure.

Actors often talk about the acting method and the process of getting into the shoes of the characters they play. Do you also carry your characters with you?

Actors can become another person, it’s so, so fascinating. I can never dream of doing this! I am introverted and serious and clumsy. And I can’t put myself in a role, I’d be terrible. Because even when I’m performing poetry, I’m just playing myself. So I can’t get rid of the people in my book either, they’re in my blood, they’ve cut deep into the bone. There is no rupture, we just learn to coexist.

You are known to explore multiple formats as a writer. Do you choose the support of the narration before or during the writing?

The idea chooses the medium. Once I make sense of my thoughts, they lead me to the right medium, whether it’s a poem or a painting, or a podcast episode. Ideas that have multiple selves are everywhere – there are ideas that can be rewritten into the spoken word if you give them the right weapons, the right rhyme, or the right repetition. Ideas that can be sketched out years after finding their way into audio. Really, anything can happen with ideas.

You had said on Instagram that it was a difficult journey. Were you talking about finding publishers?

It was certainly a difficult process. The book almost didn’t come, you know. I got all these rejection letters, and they were so sweet, that’s what really broke my heart. The publishers were intrigued, they asked for the full manuscript too, but then they came back saying they weren’t publishing poetry. Or that they only publish classical poetry. It was confusing for everyone because Teething wasn’t really a collection, it was also a story. Finding a publisher was also a long, long process. You wait and while you wait you lose your mind, yes. You’re constantly checking your email, putting yourself down, it’s hard not to be a mess. I don’t know if it’s all worth it, but seeing your book in print, holding it, sleeping next to it, is a miracle. I would do it again. All.

Who are the artists and writers who have influenced you?

I was mainly influenced by English, Tamil and Malayalam literature. Silappathikaram, Thirukkural, by Kalki Ponniyin Selvan. by KR Meera Aarachaar is my current favorite. I love Basheer and as a child I was exposed to many older Malayalam poets like Vyloppilli.

I have a strange relationship with English, because it’s the colonizer’s language, but I think that’s what pushed me to master it, to conquer it. I hated how there was so much focus on white literature when I was studying literature. I wanted more Mahasweta Devi, Jhumpa Lahiri, Perumal Murugan. I think it’s changed a lot more now. But there are also non-Indian writers that I like, like Joan Didion and Rimbaud.

Can you tell us a bit about your future projects?

I am working on a storytelling module for children in Ethiopia, Nepal, Peru, Egypt, India, Cambodia and other countries with the help of a wonderful non-profit organization focused on girls’ education, and maybe a book or two.

You can buy the book here

ALSO READ: The Rising Popularity of Podcasting – The Story of South India