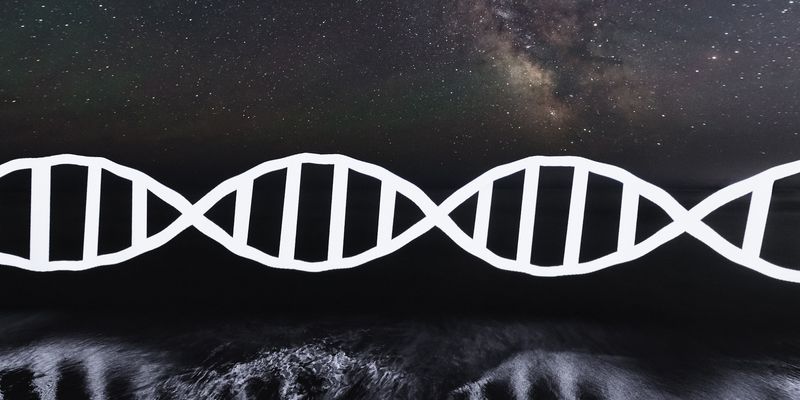 Nitriles, a class of organic molecules with a cyano group, i.e. a carbon atom linked by an unsaturated triple bond to a nitrogen atom, are generally toxic. But paradoxically, they are also a key precursor of molecules essential to life, such as ribonucleotides, composed of nucleobases or “letters” A, U, C and G joined to a ribose and phosphate group, which together form RNA. Now a team of researchers from Spain, Japan, Chile, Italy and the United States show that a wide range of nitriles occur in interstellar space in the G+0.693-0.027 molecular cloud, near from the center of the Milky Way.

Dr. Víctor M. Rivilla, researcher at the Center for Astrobiology of the Spanish National Research Council (CSIC) and the National Institute of Aerospace Technology (INTA) in Madrid, Spain, and first author of the new studysaid, “Here we show that the chemistry taking place in the interstellar medium is capable of efficiently forming several nitriles, which are key molecular precursors to the ‘RNA World’ scenario.”

According to this scenario, life on Earth was originally based solely on RNA, and DNA and protein enzymes evolved later. RNA can perform both of its functions: storing and copying information like DNA, and catalyzing reactions like enzymes. According to the RNA world theory, nitriles and other building blocks of life don’t all have to have originated on Earth itself: they could also have come from space and ‘hitchhiked’ to young Earth inside meteorites and comets during the “Late Heavy Bombardment”. », between 4.1 and 3.8 billion years ago. In support, nitriles and other precursor molecules of nucleotides, lipids and amino acids have been found inside contemporary comets and meteors.

But where could these molecules come from in space? The main candidates are molecular clouds, which are dense and cold regions of the interstellar medium, and suitable for the formation of complex molecules. For example, the molecular cloud G+0.693-0.027 has a temperature of about 100 K and is about three light-years in diameter, with a mass about a thousand times that of our Sun. There is no evidence that stars are currently forming inside G+0.693-0.027, although scientists suspect it may evolve into a stellar nursery in the future.

“The chemical content of G+ 0.693-0.027 is similar to that of other star-forming regions in our galaxy, as well as that of solar system objects like comets. This means that studying it can give us important information about the chemical ingredients that were available in the nebula that gave rise to our planetary system,” Rivilla explained.

Rivilla and his colleagues used two telescopes in Spain to study the electromagnetic spectra emitted by G+0.693-0.027: the 30-meter-wide IRAM telescope in Granada and the 40-meter-wide Yebes telescope in Guadalajara. They detected cyanoallene nitriles (CH2CCHCN), propargyl cyanide (HCCCH2CN) and cyanopropyne, which had not previously been found in G+0.693-0.027, although they were reported in 2019 in the TMC dark cloud -1 in the constellations of Taurus. and Auriga, a molecular cloud with conditions very different from G+0.693-0.027.

Other recent studies have also reported other RNA precursors inside G+ 0.693-0.027 such as glycolaldehyde (HCOCH2OH), urea (NH2CONH2), hydroxylamine (NH2OH) and 1, 2-ethenediol (C2H4O2), confirming that interstellar chemistry is capable of providing the most basic ingredients for the RNA world.

Nitriles among the most abundant chemical families in space

Final author, Dr. Miguel A Requena-Torres, Senior Lecturer at Towson University in Maryland, USA, concluded: “Based on our observations over the past several years, including current findings, we now know that nitriles are among the most abundant chemical families in the universe.We have found them in molecular clouds at the center of our galaxy, protostars of various masses, meteorites and comets, and also in the atmosphere of Titan, Saturn’s largest moon.

The second author, Dr Izaskun Jiménez-Serra, also a researcher at CSIC and INTA, looked to the future: “So far we have detected several simple precursors of ribonucleotides, the building blocks of RNA. But there are still key molecules missing that are difficult to detect. For example, we know that the origin of life on Earth probably also required other molecules such as lipids, responsible for the formation of the first cells. Therefore, we should also focus on understanding how lipids form from simpler precursors available in the interstellar medium.”

– This press release was originally published on the Frontiers website

How to keep a dead writer alive, in seven books