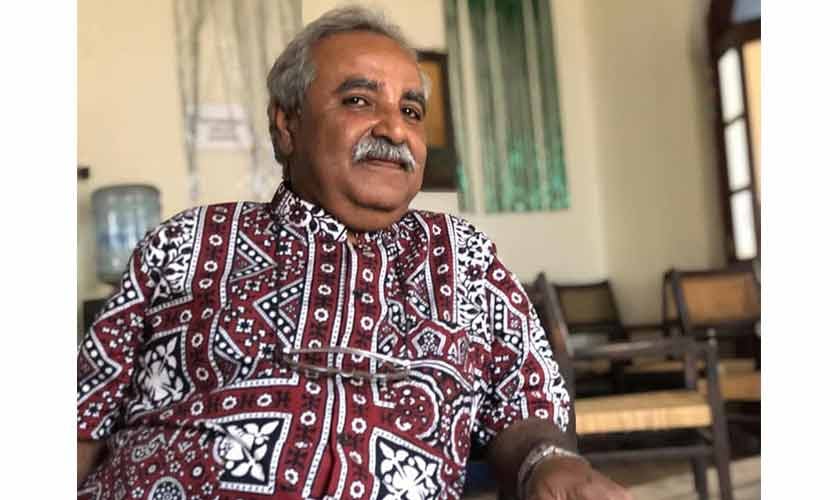 Balouch was a board member of the Human Rights Commission of Pakistan and a regular contributor to various publications focusing on the heritage and culture of Karachi. He has also taught at various universities.

Balouch had been suffering from a fever for a few days, said photographer Akhtar Soomro, his close friend.

He underwent tests on July 30 and the doctors, while informing him of his low blood pressure, prescribed him medication. However, he died before midnight. He is survived by a wife and three children.

Balouch started his career as a journalist in Mirpurkhas district, where he was born. During his studies, he became associated with the Rotary Club of Pakistan.

Later, he moved to Hyderabad, where he joined the HRCP. As the Hyderabad coordinator for the rights body, he campaigned for the release of peasants who worked as slaves to powerful landowners in various parts of the province.

Journalist Amar Guriro says he has known Balouch since 1999, when he used to visit the HRCP office in Hyderabad. “I was a student then. I had not started journalism at that time. Balouch taught me how to report, especially on rights,” says Guriro. Sunday news.

In 2003, unidentified people kidnapped Balouch after he left the annual HRCP meeting in Hyderabad with a colleague. There was a large protest demonstration demanding his release. His captors released him three days later. He had been tortured.

After his release, he moved to Karachi, where he first worked as a provincial coordinator for the HRCP. Balouch had valuable experience in conducting fact-finding missions in cases of rights violations.

Later, he joined the Society for the Protection of Children’s Rights (SPARC) and worked there for several years.

Balouch once said that his main goal in writing about Karachi was to raise awareness among its people about the massive contributions of various communities, people, historic buildings and parks to the development of the city, as well as philanthropic activities, entrepreneurship, education, art and music. . “The people of Karachi owe them a lot,” Balouch told this scribe last year.

In recent years, Balouch had started writing about Karachi’s heritage, history and people. He once said that his main goal in writing about Karachi was to raise awareness among its people about the massive contributions of different communities, people, historic buildings and parks to the development of the city, as well as philanthropic activities, entrepreneurship, education, art and music. . “The people of Karachi owe them a lot,” Balouch told this scribe last year.

He is the author of three editions of Karanchi Wala, where he wrote about aspects of Karachi’s history and the remnants of its cosmopolitan culture, using references from rare publications, research and interviews.

The topics of some of the plays in the book include the demystification of Independence Day, Nishtar Park, Napier Road, old books, India in Karachi, the city’s old Eidgahs and the fascinating pastimes of some maharajathe sand moguls.

He has also researched and written informed articles on the disappearance of Iranian restaurants founded by Zoroastrians and Baha’is – some of the first communities to migrate to Karachi.

Novelist Mohammad Hanif wrote that Balouch also taught us how to walk in the city. “Stop looking down, take a walk, ask about unknown things.”

In his fourth book, titled Teesri Jins (Third Sex), Balouch provided insight into various aspects of the life of the transgender community in Pakistan. The book was an effort by Balouch to help readers understand the language used by transgender people and how it portrays their gender identity.

The book contains 36 plays that address various topics related to the transgender community, including their norms, values, rituals, and traditions. They vary from the historical background of the community in the subcontinent, particularly in Sindh, to their daily life, religion and interactions with the media.

The bulk of the book consists of interviews with transgender people, particularly their leaders, which shed light on the challenges and issues they face in their daily lives, including their relationship with their families, the outcome of leaving their hearth, replacement of fathers with gurus, performing traditional rituals for income, wedding and dance functions, funerals, sexual violence and rape culture.

The writer is a freelance journalist and researcher. Email: [email protected] and Twitter: @zalmayzia

An enthusiastic writer, author and teacher

My take on the Ironman Task Force | News, Sports, Jobs