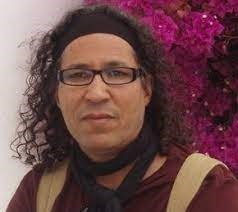 Bahia Mahmud Awah (born in 1960) is a Sahrawi writer, poet and journalist. He is a founding member of the group of writers known as the “Sahrawi Friendship Generation”.

Private life
Bahia was born into a nomadic family in 1960 near Auserd, located in the southern region of the Rio de Oro, what was then the Spanish Sahara. He was named Bahia in honor of his uncle, the Sahrawi poet Bahia Uld Awah. His mother gave him his first lessons, acting as a teacher until he joined the first schools created by the Spanish authorities, an experience he would later describe in his book “La maestra que me enseñó en una tabla de madera” (The teacher taught me on a wooden board). Bahia spent those early years between the playground and the desert, herding her family’s herds. He earned his bachelor’s degree while studying in both Western Sahara and Algeria, due to the start of the Western Sahara War.

At the end of the 1970s, he moved to Cuba to undertake his university studies, like many young Saharawis at the time. Although he has always loved the arts, he graduated in telecommunications from the University of Havana. Back in the Sahrawi refugee camps, he directed the Spanish program of the Sahrawi national radio for four years.

In 1998 he moved to Spain, where he studied linguistics and translation at the Autonomous University of Madrid and the University of Alcalá. In 2001, he launched the blog “Poemario por un Sáhara Libre” (Poems of a Free Sahara) as a space for social, political and cultural information on the Saharawi people. Since 2010 he has been Honorary Professor of Social Anthropology at the Faculty of Philosophy and Literature of the Autonomous University of Madrid. He held conferences on Saharawi literature in universities in Spain and the United States.

Career
Bahia started writing at the age of 25, based on his “Small Reflections and Poems”. In 2005, with other Sahrawi writers and poets, he formed the group known as the “Sahraoui Friendship Generation”. In 2007, the University of Alcalá de Henares published its first book of individual poems, entitled “Versos refugiados” (Verses of Refugees). In 2008 he published what he called a “short essay” titled “Literatura del Sáhara Occidental” (Western Sahrawi Literature), where he took a look at Sahrawi oral and written literature since the 18th century. to the present day, both in Hassaniya and Spanish. In 2010, the editorial Sepha published her first novel, entitled “La maestra que me enseñó en una tabla de madera” (The teacher taught me on a wooden board), a book mainly based on her childhood memories about his mother, who taught him to read and write. In 2012, the Arabic culture magazine CantArabia published “El Sueño de Volver” (The Dream of Returning), in which Awah recalls his life and experiences in the then Spanish Sahara.

Editor’s note: Click on the link below to listen to Bahia

Evaluation of tixagevimab plus cilgavimab against SARS-CoV-2