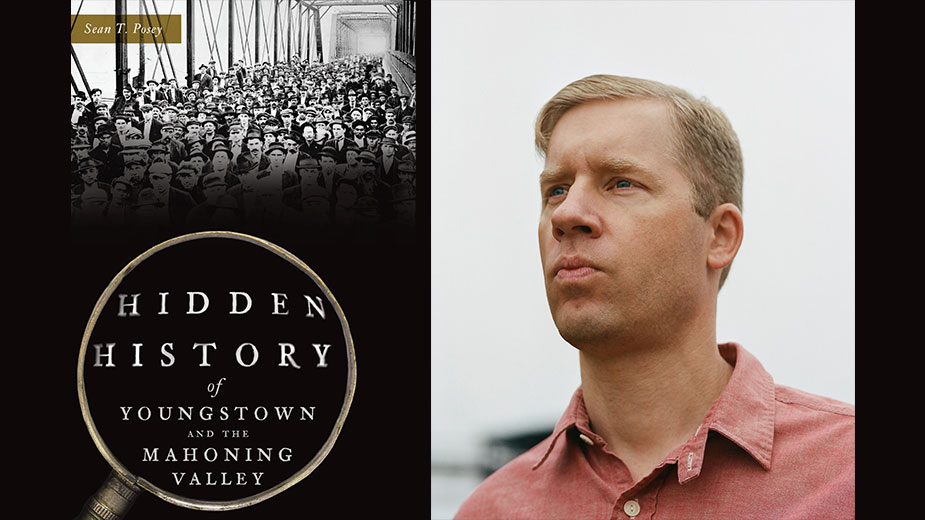 YOUNGSTOWN, Ohio – “Hidden History of Youngstown and the Mahoning Valley,” the third book in Sean T. Posey’s Youngstown-Mahoning Valley trilogy, takes readers through the history of area landmarks and unearths stories forgotten in the local history of the 20th century.

Highlights include the history of the bloody steel strikes of 1916 and 1919 and the construction of prefabricated concrete houses for workers.

The book also includes one of the very few regional corporate histories listed in the “Negro Motorist Green Book”, a travel guide used by black travelers during the era of Jim Crow segregation in the South and segregation de facto in the North.

The book is available through Amazon, Barnes & Noble and local Mahoning Valley retailers.

Posey is a freelance writer and historian whose work has been featured in various publications, including Citylab, Salon, and Bill Moyers and Company, as well as the books “Car Bombs to Cookie Tables: The Youngstown Anthology” and “Pittsburgh Anthology.” .”

The History Press published its first two books: “Lost Youngstown” and “Historic Theaters of Youngstown and the Mahoning Valley”.

LIBERTY TOWNSHIP, Ohio — To honor the memory of Rose Kravitz, who founded the deli that bears her name in 1939, Kravitz Deli will host the seventh annual Jewish Food Festival through Jan. 30.

The menu will include extra large sandwiches and a birthday brunch on Jan. 29 starting at 9 a.m. at the store, 3135 Belmont Ave.

Some of his returning favorites for the week include the traditional hard-boiled egg bagel and the unique Mish Mosh Chicken Soup.

Other Old World favorites on the menu include beef brisket, beef tongue, minced chicken livers, knishes and sweet noodle kugel with stuffed peppers and stuffed cabbage rotating throughout of the week. An expanded variety of Rose’s signature pastry, the kipfel, will also be available.

Regina Taylor’s play is adapted from the book by Michael Cunningham and Craig Marberry. Carla D. Gipson is the director and Michael Nichols is the musical director.

“Crowns” is a festive musical piece in which hats become a springboard for an exploration of black history seen through the eyes of a young woman who came to live in the South.

The music is mostly gospel but includes some rapping.

The cast calls for female, late teens or early twenties; five women between 20 and 60; a man, in his forties or fifties; and a man, 20s.

Actors should prepare 16 to 32 bars of a gospel or R&B song. An attendant can be made available. No music tracks. Acapella singing is acceptable. Rapping or spoken word is also required for the young female character. Actors must also be ready to dance. Bring a photo to attach to the audition form which will be available on the site.

Actors must be fully vaccinated and present proof.

Titled “James Rogers Jr: This, That, and The Other (The Way I See It),” the exhibit includes more than 20 images.

Rogers’ works are in private and corporate collections and have been featured in The Free Thought Society magazine and the Transformative Power of Unitarian Universalism anthology.

The Niles native earned his Bachelor of Commerce degree from YSU in 1972.

Admission is $8 per person or $12 per couple and can be purchased in advance at Eventbrite.com.

Concerns and Calls to Action from NC Teachers of the Year :: WRAL.com

The comment sections don’t matter. As a writer, I never read them