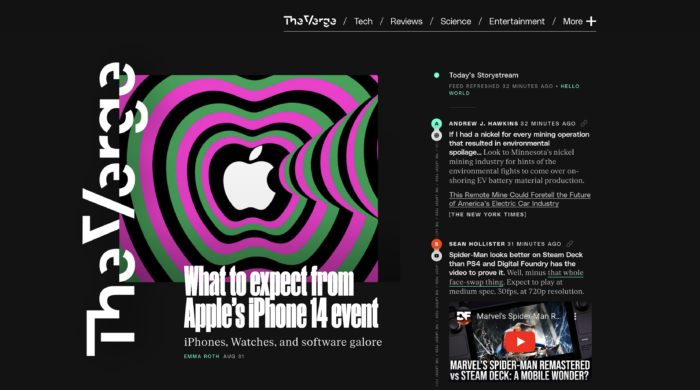 Tech news site The Verge launched a radically redesigned website this week. One of the first things editor Nilay Patel remember telling the designers when they started the process in 2020? “We just want to be able to tweet on our own website.”

“Dieter [Bohn, former executive editor of The Verge] and I was regularly frustrated that we weren’t on our own homepage enough. We are both busy. We run the site, we create podcasts, we were shooting videos,” Patel explained in an episode of The Vergecast. “The barrier to accessing our own homepage was a 500-word article. It was too high. We weren’t posting enough and we were going crazy – and we ended up using Twitter, which is someone else’s platform.

He added: “I look at the gigantic website that we run and I’m like, ‘Why do I find it easier to post on someone else’s platform rather than my own? “”

The Verge was founded in 2011, making the Vox-owned publication a veteran among tech news sites. The site launched with an adventurous homepage design and has had some bold redesigns in the years since, but the redesign kicked off on Tuesday “represents The Verge’s biggest reimagining since we started it all.” , Patel said.

The most consequential change isn’t the new fonts or color scheme (along with “Blurple”, “Pernod”, and “Hot Brick”), but the transformation of The Verge’s homepage into something the site calls it the Storystream. Vox Media has toyed with the phrase StoryStream – and the idea of ​​giving its journalists an outlet to post short-form content – in the past, but that’s usually meant bundling similar stories together from its own content. This Storystream brings together Verge’s full articles with original reporting, tweets, external links (to press releases and other news outlets), YouTube links, quick voiceovers, TikToks and more in one newsfeed.

I mentioned it in the post but @backlon and I actually made one of the first prototypes of our flow in Google Docs last year. We just had fun blogging in a doc for most of the afternoon, figuring out what we needed.

Sometimes you just have to start somewhere. Everywhere. pic.twitter.com/gKrZdPpW00

Six years ago, The Verge revamped the site to create distinctive design elements — think: neon-pink quotes and “laser lines” in videos — so content on the site would be recognizable even “when the media swoops in.” are separated into individually distributed article pages by social media and search algorithms,” Patel wrote in a blog post on Tuesday.

“But,” Patel continued, “posting on other people’s platforms can only get you so far. And the longer we lived with that decision, the more strongly we felt that our own should be an antidote to algorithmic newsfeeds, an editorial product created by real people with intent and expertise.

The new site looks a lot more like Twitter than a front page. And that’s kinda the goal. Patel said The Verge’s competitor was not Wired or The New York Times, but Twitter “and other audience aggregators.” While other news outlets are shifting their resources to building communities where readers already spend a lot of time – YouTube, Reddit, TikTok, Instagram, Discord, etc. – The Verge also wanted to make sure it was investing closer to home. Ultimately, the “great hope” is that The Verge’s homepage looks like “a better, cooler and more fun feed than social media feeds.”

The redesign was designed for mobile first — 90% of The Verge audience visits on their phones – and the team acknowledged that the desktop version is something of an afterthought. With the addition of several widgets, the reading experience can be a bit chaotic and some are examination the accessibility of the new site. Others really hate white-on-black text, which many people find difficult to read.

The idea, however, is to bring together the biggest and most interesting tech news — including the many conversations, reports, and tidbits found elsewhere on the internet — in one place. As Patel explained in the post:

Our plan is to bring the best of old-school blogging to a modern newsfeed experience and have our seasoned editors and reporters constantly update the site with the best of technology and science news from around the world. the whole internet. If that means logging on to Wired or Bloomberg or another news source, that’s great – we’re happy to send people to do great work elsewhere, and we hope our feed is useful enough to keep you coming back. later. If that means we just need to embed the viral tweet from TikTok or the wacky CEO and move on, so be it – we can do that. We can embed anything, actually: I’m especially excited that we can direct people directly to interesting threads on Reddit and other forums.

The Storystream also appears at the end of article pages, although it’s unclear how often readers will come to this. (After the text of the article, readers are faced with a big ad, a link to the comments section, a “featured video” ad, a related links section, another big ad, a sponsored content banner and then the Storystream.) Overall, the redesign is a major investment in The Verge’s homepage, already Vox Media’s most popular page, the publisher said. Helene Havlak.

“With the new site, we are making a big bet that we can grow our direct and loyal audience by curating the best technology and science destination on the web,” Havlak said. She also told Axios, “If I can just get people to refresh our site one more time a day, that’s a huge boost for my business.”

The new format will free up editorial bandwidth by eliminating aggregation posts and debates over whether “one dude’s tweets” deserve a full story, Patel said. He estimated the changes will save the newsroom 20 hours a day and said the extra time will be redirected to publishing more original reporting and analysis.

About a dozen times a day, Verge’s newsroom will review a story that hasn’t quite hit our bar for a full article. In the past that was the end of it, but the fun thing about the new site is that we can now cover them in super short quick posts (aka “Quipis”) https://t.co/3OM2WGyeWw

The Verge also announced its move to the Coral commenting platform, with the aim of fostering more quality conversations on its site. (The Verge was one of several news outlets that disabled comments on some or all articles in recent years.) Under the new protocol, moderation chief Eric Berggren will oversee community contributions, although any Verge reporter can choose to “feature” an interesting story. comment.

“We also hope to highlight our top comments in Storystream’s new newsfeed on our homepage and create a positive feedback loop,” added editor Havlak.

In the Vergecast episode, Patel also revealed a somewhat unusual goal for a news agency: the amount of traffic it can send to other electrical outlets. He said he thinks The Verge can “very quickly” send more traffic to publishers than Twitter, for example.

“One of my biggest goals – the big numbers I look at – is the amount of traffic we send. I think we’ll be hugely successful if we send a significant amount of traffic to other people,” he said. Patel said “Because this relationship between publishers and platforms has gone totally out of whack.”

“If we can just get back into the game where we’re like, hey, you can create your own communities, on your own platforms, again, in a format that both feels very modern – because it’s a thread news – but inherits the best parts of what people liked on the blogs, and you’re a good internet citizen because you share the wealth,” Patel added, “I think it lets you reset this whole relationship and then potentially building whatever the next things are, not constantly rushing against updating the algorithm, regardless of which platform is going to deploy higher or lower ranked content.

(Some of you will want to listen to the second half of the episode, where the editor David Pierce dives into the details of the site redesign with Senior Product Manager Tara Kalmanson and Senior Engineer Matt Crider. They explain why TikTok’s integrations are so terrible and how they’ve balanced speed, content and design in the redesign.)

The Verge said the typical number of visitors to its homepage doubled the day the redesign began. Here’s what some of those visitors thought:

My general rule is to be skeptical of tech site redesigns. Most of the time, they were born out of a need for better page view and engagement metrics.

The Verge redesign is more of a business model change with a (raw) redesign to go with it. pic.twitter.com/imQiZGrewy

Check out the storystream on this site. This is all after the article and honestly a much more engaging experience than being pulled into another random article. pic.twitter.com/b86NBITgRM

It does some cool stuff, but it’s a chaotic accessibility mess, half the top navigation space is unusable, and the purple comments will bleed from the retinas. Over-designing a site that people want to read for an extended period of time is…not great.

Verge’s new redesign is a very 2019 quartz app with a third-party linkhttps://t.co/DAIUQ8KgdQ pic.twitter.com/DFPqFClDSM

the home page does not come back 🙁

Censorship and the Author: Conversation with Benjamin Alire Sáenz