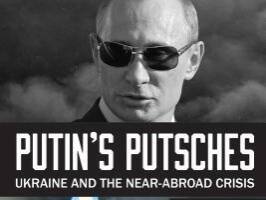 A Sonoma County author and former Central Intelligence Agency (CIA) analyst foreshadowed the Russian invasion of Ukraine with a book she published 8 years ago.

In her 2014 book “Putin’s Putsches”, Maria Halyna Lewytzkyj-Milligan, a Ukrainian-American writer and former CIA analyst, provided a compelling description of the conditions that led to the current war. These include the pro-Western uprising in Ukraine from 2013 known as “Maidan” which toppled the corrupt pro-Russian government; Vladimir Putin’s ambition to restore the Russian empire in which he grew up; and increased Russian interference in Ukrainian affairs, particularly in eastern Ukraine.

Maria wrote with remarkable foresight about the Russian military and political intervention in Ukraine and the effect these pressures had on the ordinary people living there. She profiled 12 citizens living in the occupied regions of Donbass and Crimea, all of whom were fighting for Ukrainian sovereignty and democracy in their own way.

With Maria’s help, I was able to get in touch with these Ukrainians and find out how many were coping with the Russian invasion 8 years later.

Anna Pavlychko is a mother and airline manager who has lived all her life in Crimea. She considers herself a patriotic Ukrainian and was devastated when Russia took control of Crimea in 2014. The book describes her opposition to the occupation.

In an email to me, she described how the Russians have methodically taken control of the media and imposed a police-state atmosphere in Crimea since 2014. “There are signs everywhere urging people to report to the authorities anything that is “suspicious”. Television is replete with Russian-controlled propaganda demonizing the West and portraying the war as an effort to liberate Ukraine from the Nazis.

Grieving, she finally moved to Irpin, a suburb of Kyiv, some time ago. Unfortunately, Irpin became one of the battle zones in the struggle for the capital, and she was forced to flee to Moldova. “Irpin is destroyed, bombs have fallen everywhere, and I don’t even know if the place where we lived still exists. My job is gone. I don’t know where I will go now.

Rustem Skibin is a Ukrainian artist with Tatar and Uzbek roots. After art school, he opened a workshop of his ceramic art in Crimea. Occupation by Russian troops threatened his family, so he fled to kyiv 8 years ago.

Since the 2022 war started, Rustem has stayed in Kyiv and has been helping victims and refugees. During the first weeks, he drove people fleeing the violence to the station. Now, his charitable organization has signed on with the Armed Forces of Ukraine to provide humanitarian aid to families suffering due to the war.

Rustem also created a haunting piece of art highlighting the destruction of Mariupol. The buildings in the poster he drew below are spelled “діти” which means children in Ukrainian.

Tatyana Zarovnaya is a journalist from Donetsk in the east. There, surrounded by Russian-backed separatist forces, Tatiana risked her life covering the struggle for Donbass. “In Donetsk, citizens began to be killed for their political beliefs and opinions. Anyone who has expressed their commitment to Ukraine could be killed, kidnapped or tortured. Several of my friends were killed in the spring of 2014.”

She eventually fled to kyiv. “The second time Russia took my house from me was in March 2022. A shell of Russian soldiers flew into my new house near kyiv.” Currently, she is staying in western Ukraine with friends.

“I’m sure we can defeat the aggressor,” she emailed me. “We will be able to protect not only the future of our children but also European civilisation. What is happening in Ukraine today is a war of civilizations. Putin’s civilization is the destruction of all that is human, it is chauvinism and dictatorship. Our values ​​are freedom, development and human rights.

Where to find out more

If you would like to read Maria Halyna Lewytzkyj’s powerful book, you can find it on Amazon at: https://www.amazon.com/Putins-Putsches-Ukraine-Abroad-Crisis/dp/1633530116

Prior to working for the CIA, Maria received her master’s degree from the Middlebury Institute of International Studies and a bachelor’s degree from San Francisco State University. Maria is now a freelance editor and writer, but currently devotes much of her time to helping Ukrainian refugees obtain humanitarian aid and resettle abroad.

One of my former clients from Ukraine, Oleg, contacted me recently; I helped him get asylum here over 15 years ago. Now he is a heart surgeon at a local hospital. I asked him if his family needed help obtaining refugee status. No, he said. Her 65-year-old father and two brothers had joined the Territorial Defense, while her mother works as a nurse.

The struggle for freedom in Ukraine is not new; it is multi-generational and sustainable. Слава українським героям! (Glory to Ukrainian heroes!)

Christopher A. Kerosky has practiced immigration law for over 25 years and is currently a professor of law at the Empire College of Law. He is a former member of the Sonoma County Human Rights Commission.