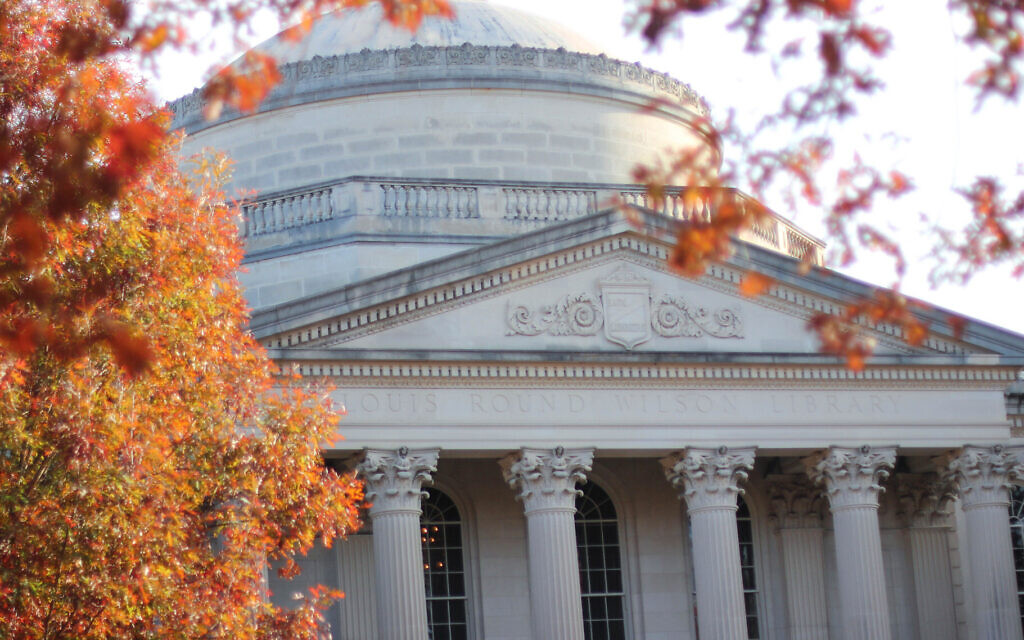 US student newspaper pulls anti-Israel column after author is threatened

JTA — The student newspaper at the University of North Carolina at Chapel Hill published a column criticizing students traveling to Israel after its author said he and his mother received threats in response to the article.

The column, titled “When Studying Abroad Becomes a Political Statement,” was published on Wednesday and removed on Sunday.

“Disagreeing with the outcome of an individual’s work is one thing,” Daily Tar Heel editor Guillermo Molero wrote in a statement explaining the retraction. “But personally harassing people, especially those not directly involved in the publication of said work, is irresponsible and reprehensible.”

In his column, opinion writer and Daily Tar Heel editor Carson Elm-Picard called Israel an “apartheid” state and argued that students who travel to Israel are making a political statement that done to the detriment of an oppressed people”.

“I have no qualms with anyone enjoying the beach or posting on their social media – I do both frequently,” Elm-Picard wrote. “On the contrary, I was shocked by an American casually traveling in Israel, when all I could think about was Palestinian apartheid going on in one place.”

He also wrote that he was “definitely not an expert” on the Israeli-Palestinian conflict in part “due to the fact that Israel actively combats negative narratives using propaganda on platforms like TikTok.”

The Old Well is seen near the South Building on the University of North Carolina campus in Chapel Hill, North Carolina, April 20, 2015 (AP/Gerry Broome)

The column received backlash online, with critics arguing on social media that it upsets Jewish students. On Sunday, Elm-Picard tweeted that her mother was receiving “hate messages”.

“That being said, I stand by the statements I have made and realize this may seem like a bit of a recantation, but ultimately I will put the safety and well-being of my family first,” he wrote.

UNC at Chapel Hill has about 1,000 Jewish students. Elm-Picard did not respond to a JTA inquiry when releasing the time Tuesday afternoon.

In his statement, Molero said that the arguments expressed in the opinion section of the newspaper are “strictly those of the columnist who writes them”.

“The column in question has been removed for the safety and well-being of its author, which The Daily Tar Heel will do whatever it takes to preserve,” Molero wrote. “We are proud of the work of our talented opinion writers, editorial board and columnists, and grateful for the exciting and challenging work they have done to improve our newspaper.”

Supporting The Times of Israel is not a transaction for an online service, like subscribing to Netflix. The ToI Community is for people like you who care about a common good: to ensure that balanced and responsible coverage of Israel continues to be freely available to millions of people around the world.

Of course, we’ll remove all ads from your page and you’ll unlock access to great community-only content. But your support gives you something deeper than that: the pride of joining something that really matters.

Join the Times of Israel community Join our community Already a member? Log in to stop seeing this

You are a dedicated reader

We’re really glad you read X Articles from The Times of Israel over the past month.

That’s why we started The Times of Israel ten years ago – to provide discerning readers like you with must-read coverage of Israel and the Jewish world.

So now we have a request. Unlike other media, we don’t have a paywall in place. But since the journalism we do is expensive, we invite readers to whom The Times of Israel has become important to support our work by joining The Times of Israel community.

For just $6 a month, you can help support our quality journalism while benefiting from The Times of Israel WITHOUT ADVERTISINGas well as access Exclusive content only available to members of the Times of Israel community.

Thanks,
David Horovitz, founding editor of The Times of Israel